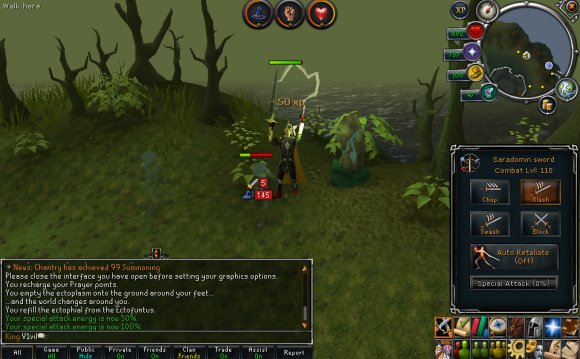 RuneScape is an adventure role-playing computer game which can be played by anyone who has access to the Internet. Each player creates a character with which they will explore the world of Gielinor, the fictional fantasy setting for the game, and be able to interact with other players. The game is controlled by the mouse and the keyboard, with the game screen showing where the Character is and the area around it.

RuneScape is free to play, although extra benefits and features can be unlocked for a small membership fee. You can find out more about RuneScape membership here.

There is no set path for the game or specific ending, the player is free go to any location in the game and engage in a variety of activities, including:

These are set story lines where the player will interact with the game environment to achieve a set goal, often for a reward. The quest will involve solving problems and beating puzzles set by the game, talking with computer controlled characters, and fighting a variety of monsters. Quests can take between 10 minutes to several hours, although they do not have to be completed in one game session. The rewards for the quests are normally in-game items, the ability for their character to perform new feats, and access to new areas of the game.

The game is set in a large fictional world with many differently themed areas in it. Each of these areas has unique things that can be done in them and non playable characters (NPCs) that the player can interact with. Some of them require a player to complete Quests to access them, or to have met other requirements.

It is possible for players to engage in virtual combat in the game, using a variety of methods based around swords/melee weapons, bows & arrows/ranged weapons, & fictional magics. These can be either against computer controlled monsters or against characters controlled by other players and take place in a variety of environments, many of which have specific rules for the fights. Whilst it is possible for a character to "die" from the fights they will also come back and the player is not affected by the character's "death", other than if the character loses some of the items they had on them. The "death" of a character is designed to add excitement to the game, along with a small element of risk, and is never permanent.

There are a wide range of things that a player can do in the game that do not fall into one of the above categories. These range from puzzle games to challenge events to interacting with computer controlled characters who talk to the character from time to time. Most of these are optional and add a great amount of variety to the game.

Give us feedback about this pageThank you for your feedback