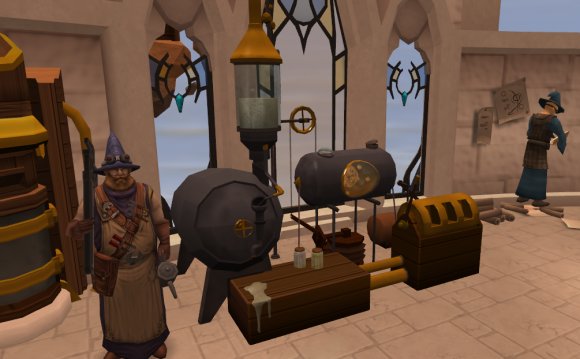 This section describes how to use this calculator, and gives explanations of terms used and the various settings available.

To add an ability to the bar, click on a slot of the bar, then click on the ability you want to add. To change the ability class, click the icons along the top row. To close the hovering window without adding anything, click the icon in the top-right. To empty the selected slot of an ability, click the button at the bottom of the hover, labelled Clear ability.

Abilities that cannot be used based on your current settings are greyed out.

Whenever any changes are made to the bar or settings, the AADPT will be recalculated automatically. Only the first 9 slots (outlined in yellow) are accounted for for revolution, as it is in-game.

Average ability damage per tick (AADPT) is an empirical measure of comparing revolution bars, and is given as a percentage. It takes account of the maximum and minimum damage of each ability (thus average), is weapon-independent (being a percentage), and is rated per game tick, as opposed to per second (1 tick = 0.6 seconds).

If you wish, you can easily convert AADPT to DPT (damage per tick) or DPS (damage per second):

Several abilities have to be slightly changed to be used in the calculation.

Tuska's Wrath functions differently when on a Slayer task and when off-task. Off-task it does 110% ability damage with a 15 second cooldown. On-task it does 100 × Slayer level as a critical hit (so actually 120 × level). This is converted into a percentage to be used in the calculation: with level 99 Slayer, it can hit 11, 880; ability damage of tier 90 weapons with level 99 skills is 1666, giving an estimated ability damage of 713% - note that this percentage can wildly vary based on your equipment and levels, use with care.

The basic settings are always shown above the actionbar.

This defines which combat class you are using - melee, magic or ranged - and thus which abilities are available.

This defines which hand layout you are using - one-handed, two-handed, duel-wielding or one-handed-with-shield - and thus which abilities are available.

This tells the bar that what you are fighting is not immune to stuns, and as such abilities like Backhand will stun them - which in turn means abilities like Punish will have increased damage if they trigger during the stun duration. Enabling this will either do nothing to your AADPT, or slightly increase the value if the abilities align such that a stun-buffed ability follows a stunning ability.

This works similarly to the above point about stuns, except that ice spells count as stuns when used on stunnable monsters (meaning Wrack) is always buffed). This'll leave a more notable increase in your AADPT, if Wrack is used in it. Unlike conventional stuns, this does not apply when fighting players.

Used by Tuska's Wrath to determine whether to use the on-task or off-task version. See for more.

Using this dropdown menu, you can load a pre-existing ability bar so that you can verify the value it is given or toy with it. Simply select the bar you want from the dropdown then click the Load button - this will erase whatever is in the bar when pressed without confirmation, be aware! You can also load bars by clicking the Load in calculator links on Revolution/Bars.

Clicking this button will empty the actionbar of any abilities. There is no additional confirmation of this and it cannot be undone!

This variable defines how many ticks the revolution bar is simulated for in order to calculate the AADPT. Increasing the value is will increase the accuracy of the AADPT, but will also increase computation time.