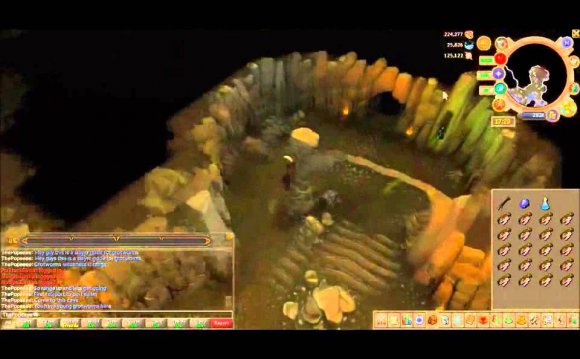 The Ramokee Skinweaver who created the dungeon can be found on the bottom floor, perched on top of some mushrooms. On the top floor of the dungeon, near the entrance, is a Merchant. He runs the Polypore Dungeon Supplies store, which sells mycelium web armour, and can also exchange items with players who bring him drops from the monsters of the dungeon.

Note: All ranged and melee hits done to these monsters are heavily capped (including Dwarf multicannon) to 40 damage per hit. They are weak to Magic, and in addition are immune to poison.

NOTE: The poison cannot be negated with cures, even though the hit is poison related only. After a hidden update, the monster's infection was increased. Grifolapines hit anywhere from 70-120 and Ganodermic beasts hit from 90-160. Infested axes hit much harder due to the fact that they only deal the damage when they attack you.

To tell what monsters reside on the platform easily, you can tell by this way. Fungal monsters reside in a green platform that has some green vines and green fungal plants. Grifolapines reside in a large, circular platform with purple-pinkish eggsacks and purple-pinkish fungal plants. Grifolaroos reside in a medium-large sized circular platform with the same as the Grifolapine details, but there are four holes inside their platform. Ganodermic runts reside in a green platform with yellow plants, what seems to be a pack of Polypore spores and small shoots infested with ganodermic fungi. Sometimes monsters may move from their 'home' platform to another platform, so if you don't have the slayer level to hurt them, right-click to prevent an accidental attack.

Using neem oil on monsters may yield flakes, polypore spores, grimy herbs and Herblore secondaries. It will also cause them to stop infecting the player with toxic fungus for 15 ticks. When used against Grifolaroos and Grifolapines, they will only attack with Ranged until the fungus on their backs grow.

A tour of the dungeon

Click to view a larger version (opens on a new page).

The maps show the typical arrangement of monsters on the platforms. However, monsters always tend to move away from their platforms. Such examples are Grifolaroos and Ganodermic runts that litter the middle floors, as they are seen wandering off to other platforms with other monsters.

The resource dungeon is similar to the other areas, although the bottom floor seems to lack Ganodermic beasts and have more ganodermic runts instead.

Neem drupes grow on vines in three places in the main area of the first level dungeon. Two vines are on the platform containing Merchant and the dungeon's entrance. A third is at the end of the first floor near the rope that takes players to the second floor.

In the Resource Dungeon, players can find at least two vines of neem drupes hanging outside the entrance.

A player can pick the drupes from the vines. If the player has an empty jug or jug of neem oil in inventory, the drupes are automatically squished into neem oil when picked. This is a way for players to acquire neem oil without first having to kill polypore monsters for their drupe drops.

A vine holds six drupes. Drupes grow back after being picked at a speed of about 5 seconds per drupe.

The flakes dropped can be used to create armour. Spores can be used to make a polypore staff. Should a player wish to "clean" the armour, they will only receive HALF of the flakes/spores that were left on the armour/staff. So, if a player wanted to clean their ganodermic poncho for the flakes only, and had 80% flakes left, which is 4000 ganodermic flakes, they would only get 2000 flakes back and the mycellium poncho. If a player had a polypore staff and wanted to sell the spores only by cleaning, and the staff had full charges, it would revert into a polypore stick with 1500 polypore spores.