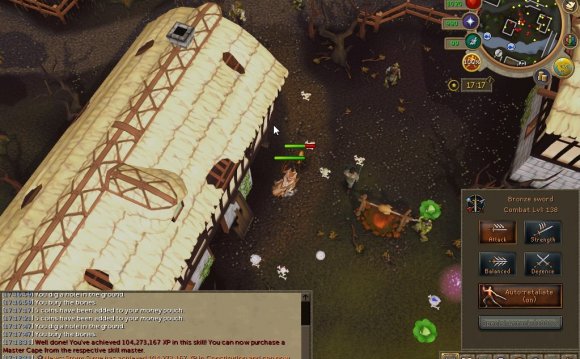 In order for your account to be an official ironman, you must speak to Adam or Paul before leaving the island.

Ironman Mode and Ultimate Ironman Mode are account-types that were released in Old School RuneScape on 13 October 2014, as official support for the Ironman style of playing, where players are completely self-sufficient.

Both modes can only be activated by speaking to either Adam or Paul on Tutorial Island before being teleported to the mainland. You are also able to decide if you would like to be able to type in your bank pin to revert your ironman account into a regular account, or if you want it to be permanent.

Typically, the first step when creating a new account is to create goals, both long term and short term, that allow you to not only stay on track but to also make sure that you don't complete a quest that levels or over-levels a skill that you didn't intend to. One of the main things you should consider before leveling any combat skills is how your combat level will affect all of the various methods of obtaining things through the wilderness. For example, an ironman account may keep their combat level at 3 so that they can catch black chinchompas in the wilderness with little to no chance of being killed via PVP. Another good example, it is worth keeping all combat stats but magic at 1 so you can kill Lava dragons without getting PKed. Regardless of when you start training your combat levels, the most efficient way to level your combat stats is by completing quests which give you large amounts of experience. This causes you to be able to quickly jump up and kick-start leveling so that instead of killing chickens with a bronze dagger, you are able to complete the Waterfall Quest and then The Feud to be able to start training with an Adamant Scimitar before even touching a monster.

A looting bag allows you to store 28 items. You can only store items when standing in the wilderness. Items in the looting bag do not add to your total weight. Barrows items in the looting bag will not degrade when you die (needs confirmation). Since ultimate ironmen cannot use banks, you can only get your items out of the bag by dying and picking up the items; this will destroy the bag. It is therefore not advised to get high-effort items that disappear on death, such as gem bags or coal bags. Looting bags are dropped by all monsters within the wilderness. The easiest spots are therefore the Giant rats north of Varrock or the skeletons north of Edgeville. A looting bag is counted as a weapon/banned item and can therefore not be taken to Entrana (unless it contains no banned items) or Glarial's Tomb (even if empty). Destroying a looting bag will destroy the items inside and it therefore should be taken into account when doing activities that don't allow a looting bag to be taken inside, like going to the aforementioned areas.

Complete the Abyss (miniquest) upon finishing Rune Mystery Quest as it grants 1, 000 Runecrafting experience, gives you the small rune pouch, and allows the player to access the Abyss.

Trained as normal. Walk or teleport to the highest level course you are able to train on.

Doing Rooftop Agility Courses (like Draynor and Seers' Village) allow you to collect marks of grace, which is used as currency to purchase pieces of the graceful outfit, which possesses weight reduction abilities.