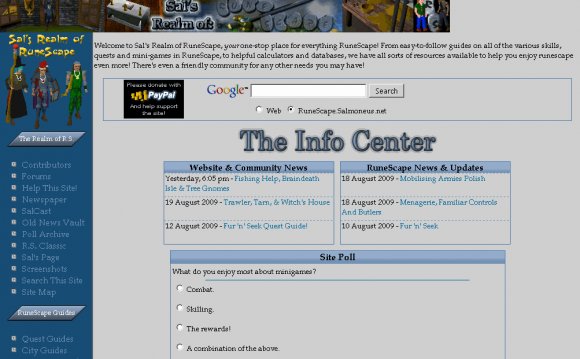 On 13 February 2013, a members-only poll was launched to gauge the interest of players in an "Old School" version of RuneScape. Old School RuneScape was promised to be free for the first month (until 31 March 2013) for all players who voted. The number of votes would determine how much support would be invested in the game:

50, 000 votes would essentially bring the Old School servers online, but no new features or content would be added to the game. It would cost an additional membership fee of $15 to play.

250, 000 votes would give the Old School version of the game a small development team to apply bug fixes and improvements. The additional membership fee would be about $5.

With 500, 000 votes, the retro version of RuneScape would receive a dedicated development team, regular maintenance and content updates at no additional membership fee.

Finally, with 750, 000 votes, Old School RuneScape would get a larger development team, continuous maintenance, and polls to determine future updates. The free portion of RuneScape 2007 would be available to everyone.

On 01 March 2013, the final positive votes in support of Old School RuneScape numbered 449, 351. Even though the number of votes fell short of the 500, 000 necessary to bring the game back free of charge to members, Jagex promised to not charge members an additional fee to play Old School RuneScape for the first 6 months, and then evaluate the popularity of the old game. If the game remains popular and continues to grow, Jagex will not charge an additional fee to play it.

On 22 February 2013, players' wishes came true, and the RuneScape 2007 servers were opened to all players who had voted in the poll. Upon login, players would appear on Tutorial Island — a beloved part of RuneScape which had long since been removed — with all stats reset to their starting level, and an empty inventory/bank.