Where can I Buy Runescape membership Cards? 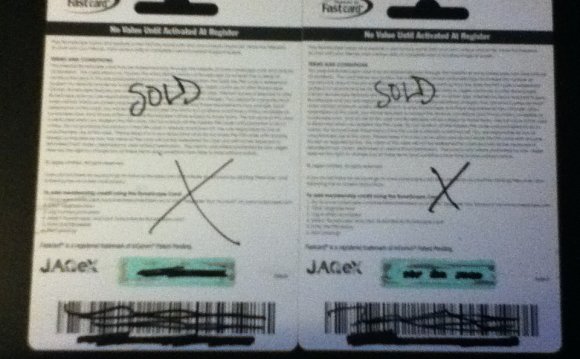 RuneScape Membership Cards are Game Cards purchasable from over 29 different retailers, which are redeemed for membership time in RuneScape. They can be bought in the 30 day and 90 day denominations. There are at least 4 different membership cards, a 30 day card, a 90 day card, the green card, and the red card. A PIN is located on the back of the card, which is entered into the RuneScape website after selecting the option from the Membership subscription page.

A 30 Day RuneScape membership card is purchased from select retailers, and when redeemed, will give the player 30 days (1 month) of RuneScape membership. In the United States, these cards cost $10/$25. When redeemed, loyal members (those who have a reduced price for being a member for over a year non-stop) do not receive any bonus credit. Therefore, if you have the price discount, it is recommended to not buy this card. If this card is redeemed between 20 October and 4 November 2011, you will receive the option to change your skin colour to green by visiting Diango or the makeover mage. Currently there is no reward for a 30 Day Membership.

A 90 Day RuneScape membership card is purchased from select retailers, and when redeemed, will give the player 90 days (3 months) of RuneScape membership, or, if the member is a loyal member (those who have a reduced price for being a member for over a year non-stop) receive 15 days bonus credit, bringing the total to 105 days. In the United States, they cost $22.50. From 20 June to the 10 July of 2011, when a 90-Day game card from GameStop was redeemed, you would be given a free in-game item, the Ornate katana. When redeeming a 90-day game card from Target (USA) or GAME (UK) from 18 November to the 8 December 2011, players received a free Turkey Hat. On dates between 22 June 2012 - 15 July 2012, if you buy a 90 Day RuneScape Game Card from selected stores you will receive a Flaming Skull. This reward is not included when purchased online. (possibly because of the contract between Jagex and the shop).

The green and red cards have several different options, ranging from 100 days, 60 days and some spins, to a certain amount of rune coins.