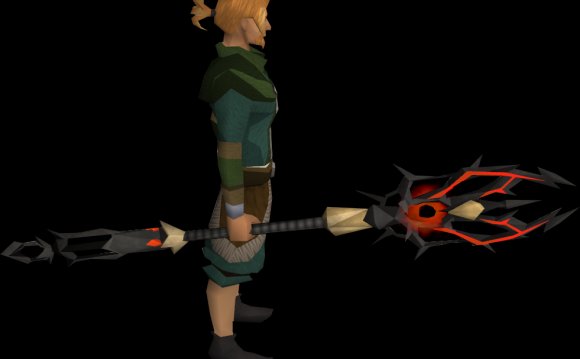 Players have the option of sheathing or keeping their weapons unsheathed at all times. This only affects the character's appearance while out of combat. Sheathed weapons will appear either at the character's waist or back. If in the sheathed stance, the player will display their total skill level. The player will display their combat level instead if the weapons are unsheathed.

Artwork of Silverlight from Issue 19 of the God Letters

An example of a weapon's stats

An accuracy bonus is found on all weapons. Damage comes differently, for all melee weapons have a damage bonus, whereas some ranged weapons and all magic weapons do not. This is because ranged damage comes from ammunition, and magic damage from spells.

Melee weapons can be stabbing, slashing, or crushing, and ranged weapons can fire arrows, bolts, or be thrown themselves. Magic weapons bear no subclasses as those are determined by the player's autocast spell.

All weapons also have an attack speed, which is the rate a wielder attacks a target with it. Most weapons are classed Fastest, Fast, or Average. Slower weapons have higher damage bonuses than faster weapons, meaning that weapons of different speeds offer equal damage per second, given they are the same level. Ability damage too is equal between different speeds.

Many main-hand weapons have off-hand versions, giving half the damage of the main-hand. When wielded together they offer 150% the damage per second of the main-hand by itself. This is known as dual wielding. Alternatively, a two-handed weapon combines the damage of the two weapons. Either set up is customary for achieving the greatest damage output. Even though off-hand versions of weapons sport a certain accuracy number on their description, they fully inherit the accuracy from the main-hand. Wielding a level 60 main-hand and a level 40 off-hand weapon will result in the off-hand weapon having the accuracy of a level 60 weapon as well.

Certain weapons offer a unique ability while wielded, accessible as the Weapon Special attack in the Constitution ability book. Unlike other abilities, each special attack requires its own amount of adrenaline and drains that full amount when used.

These weapons are more commonly used than the other weapons available, because they do not require ammunition to use, unlike most Magic or Ranged weapons. Most types of basic weapons come in seven different kinds of metal. Melee weapon types include:

Ranged weapons may be used to attack from a distance. They require ammunition to use. Most types are made from Ranged weapon types include: