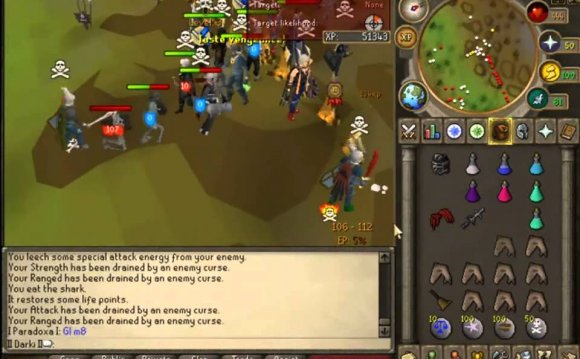 Mod Nexus: How long did it take to write RuneScape Classic?

Andrew: It depends how you measure it really. Including the pre-cursors like DeviousMUD and things like that it took years, although I didn't really start RuneScape Classic itself until I'd finished university and had some time. So I started it properly in August 2000 and I launched the beta (whatever you want to call it) in January 2001. So it wasn't that long, but I was building on a lot of previous multiplayer games so it's always easier to write something, even if you're doing it from scratch, when you know exactly what it is you've got to do before you start...

Mod Nexus: Was it just you at the time or was Paul involved as well?

Andrew: It was Paul as well; the figure we talked about was two years in the making when we launched it because we were including all the previous failed attempts. RuneScape Classic was actually about the third attempt at making an MMOG; I just kept starting again until I got it right. Paul was working from Nottingham and I was in Cambridge so we weren't in the same room and we were communicating entirely over ICQ. By the time we launched, we were both working full time and in the December of 2000, just before we launched, I went back to Nottingham for Christmas and I was in the same room as Paul and development sped up considerably. Things like the Mining skill and the Smithing skill were all written in a matter of days in rapid succession and I just wanted to launch it.

There was a real rush to add content and up to that point we'd been focusing on the quests and making the game work, being able to walk around, talk and do things. There were no skills so there was no actual meat to the game so you'd do all the quests, which would have probably taken you about 20 minutes, and then there was nothing to do so we added all the skills in a matter of a few weeks.

Mod Nexus: Which quests were there to start with?

Andrew: There were four or five.Shield of Arrav was definitely a launch quest.Demon Slayer was, Cook's Assistant of course, andSheep Shearer

Mod Nexus: How long did it take to get to the point where lots of people were playing and you thought that 'we could make a go of this'?

Andrew: It hit the critical mass with enough people playing to make it work on the first day, which was a massive relief. I think on the first day we had about 30 simultaneous players which wasn't bad for one game world which was quite small at the time. That rapidly increased to 100, 200 over the course of about the first week.

Mod Nexus: How did news of RuneScape spread?

Andrew: It was purely word of mouth. There were quite a lot of people who knew me from my previous games I'd done for other websites, and I had a runescape.com website up saying 'coming soon' for several months beforehand. It was amazing and there was very little else on the internet at the time, so if you found a game worth playing you told people.

Mod Nexus: Can you believe that it's been going for 10 years?

Andrew: Certainly not. If you'd have told me at the start that I'd be doing it 10 years later I wouldn't have believed you! I thought it'd be like every other game I'd written, do it for a few months and that would be it. The fact that 10 years down the line it's still being developed is a first.

Mod Nexus: Did it occur to you to have constant updates from the start?

Andrew: There was no business plan that this would be regularly updated. I think, originally, it was more that I launched it before I'd finished and wanted to keep improving it. Every game previous to that I'd finished it, done it, launched it and then not touched it. I'd been writing RuneScape for so long I just wanted to launch it, and improve it afterwards. I kept thinking of more ideas and for a long time I thought I'd got about 6 months of ideas then I'll be out of all the things I wanted to do. And 6 months later I had another 6 month's worth of ideas, and so on. It just seemed there was always one more thing I wanted to add to the game and after a while it became apparent that this is what people wanted. People were playing for the updates and it became deliberate.

Mod Nexus: Do you have a favourite memory or funny moment in Classic?

Andrew: Well most of the funny moments involved the chat filter. I'd had a number of different attempts at this, and it had a habit of breaking in entertaining ways. For example, as an experiment we tried a white-list of allowed words rather than blacklist of disallowed words, but the list was inadequate and it didn't help if you couldn't spell so it tried to correct them and you couldn't work out what people were saying. People were very upset about it but they couldn't tell you... 'This update is Ship!'

There was another rather infamous bug where if it [the chat filter] crashed, it replaced your text with the word cabbage because it had to do something. Somehow we launched a version of this with the chat filter broken and all people could say was cabbage.

Andrew: It's probably the Cooking skill. In RuneScape Classic it was the most sophisticated skill. It had ingredients that you had to mix together in different combinations. We actually put considerably more work into Cooking compared to the other skills. Mining was trivial, you hit a rock you get ore there was nothing more to it. The same goes for Woodcutting, Fishing, Smithing, so Cooking was a little more in depth due to all the different recipes.

Mod Nexus: Anything you'd want to move from Classic to RuneScape that you haven't, perhaps sleeping bags!

Andrew: Definitely not sleeping bags! I think if I did, I'd have moved it into RuneScape already. I still like the retro feel and simplicity of it but you can't move that.