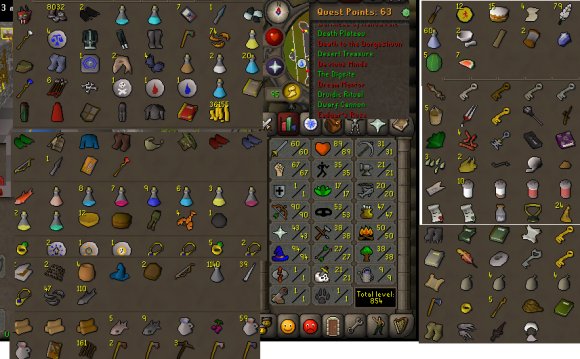 A few small-time fines might seem like a light penalty for destroying one’s life savings, but everything changes if that life is virtual. A South Wales teen found out the seriousness of logging into a friend’s Runescape account and “decimating” the savings he found within when a judge charged him with “gaining unauthorized access to a computer” and “making unauthorized modifications to computer material.”

These seemingly dire charges only earned the teen a scolding and a forced reparations, though he also earned an 8-month term of probation and a few additional fines for stealing $30 worth of booze immediately after the fantasy attack.

This incident seems to have begun and ended online, a spiteful attack made in retribution for an allegedly hurtful comment on Facebook. The teen, (whose name is publicly available, but come on, let’s not crucify him), logged onto the Runescape account of his former friend’s partner while spending the night on their couch. Rather than simply deleting the character, as have so many disgruntled ex-girlfriends of yore had done, he deleted or gave away the character’s 6 years’ worth of in-game savings. It’s important to note that the offender knew the computer’s password, which likely saved him from more serious hacking charges.

We don’t know the specific amount of currency lost, but the term “decimate” seems to imply that at least 90% of the online funny-money was frittered away before a drunken, midnight escape. The judge was (rightly) convinced by the argument that the lost online currency did not constitute a real monetary loss, though in reality Runescape money can be sold online for real cash. Since this is not allowed by the game’s creators, the online grey market for virtual goods is not considered a real gauge of value.

But what if this had been, say, Diablo III with its real money auction house? There is an increasing movement to blur the lines between real and virtual currency, and the justice system is going to have to contend with the implications. What if this incident had involved an item that actually was worth real money — what then? If two bottles of booze earned him 8 months’ probation, would a legendary breastplate land you in prison?

In the recently released Dust 514, it’s possible to lose use of items bought with real money due only to in-game losses, an utterly inane system that begs the question: what do we do about griefers when their efforts start to actually impact our wallets?

Get Your Free Runescape Accounts Today