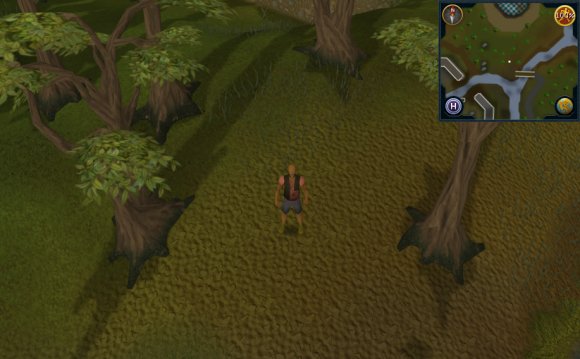 Making History is a quest about the restoration of the outpost north of West Ardougne and preventing it from being destroyed. During the quest, major parts of Kandarin's history and that of the Ardignas bloodline are revealed.

To begin, speak with Jorral at the outpost located south of the Tree Gnome Stronghold, and north-west of West Ardougne. He is distraught that the outpost will soon be razed to make way for King Lathas' alchemists' lab. He shows you the outpost's "great" history through a rather humorous cutscene, and requests you to help him save the building by providing the King with the building's history and convince him to reverse his decision.

In order to save the outpost, you must gather information from various sources: Erin the silver merchant, Droalak the ghost, and Dron the warrior. This can be done in any order.

The location of the chest

Erin's great-grandfather was stationed at the outpost, according to Jorral's records, and he thinks it might be useful to speak to Erin about it. The silver merchant can be found at his silver stall in East Ardougne.

Speak to Erin and inform him about the potential fate of the outpost. He will instantly come up in arms, claiming that the construction of an alchemists' lab will only cause chaos. Although even his mother doesn't know about his great-grandfather too well, he provides you with his only heirloom - an enchanted key - that you may use to learn about the outpost's history.

The enchanted key reacts to a buried chest, and the closer to the chest you are, the warmer the key. The key's states go from frozen, to cold, to warm, to very hot, to burning hot, and finally to steaming hot when standing directly on top of the chest. The chest is located between the observatory and the Castle Wars lobby, and you must dig it up using either a spade or meerkats.

Use the enchanted key to unlock the chest, which contains a journal about a Zamorakian named Drozal, who took up residence in the outpost with 8 other followers and created trouble for the people of Ardougne.

Note that additional treasure from the enchanted key can only be obtained after the quest has been completed.

Droalak, according to Jorral, died at the outpost and might be able to provide valuable information about the outpost. He can be found wandering near the Port Phasmatys general store. Droalak tells you that he holds a scroll describing the timelines of the outpost, but he first wants your help in reconciling his wife, Melina. He had gone against his wife's wishes, and left to go to the outpost, and she refuses to forgive him for not returning to her. In order to earn her forgiveness, he requests you to present her with a strung sapphire amulet, as that was the last gift he had given her.

Melina, also dead and now a ghost, can be found in the building just east of the general store. She is elated by Droalak's gift and agrees to forgive him, before passing on from the world. Go back and deliver the message to Droalak, who hands over the scroll as a token of gratitude, and requests to inform him if the scroll was of any use.