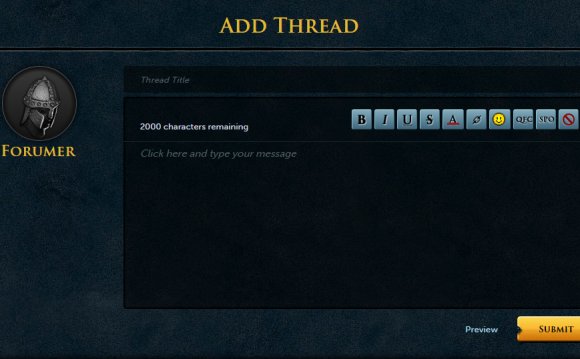 The RuneScape Forums contain a selection of different areas where discussions can be had, divided into different categories. Each area or forum focusses on a specific type of discussion which are typically obvious from the forum title.

Inside a Forum are a series of discussions, with each discussion having it's own thread. A thread is a simply a series of replies by forum users. Each post is listed in the order they were made.

Rather than make a new discussion it's often the case that someone else has already started discussing the issue. In which case you can simply reply to their thread. Feel free to use the Search feature to find similar discussions before you post. If it's a common issue a Jagex Moderator may have already started a discussion - these locations are best to post on as it means Jagex can easily collect the feedback.

Note that most threads are limited to 2000 posts each. In addition there are character limits to each post.

If you find you need more space per post you can make multiple posts in a row (but don't do this unnecessarily). It might also be easier and better to plan your posts out on a text editor, then reserve the right number of posts so they are in order with no gaps and then edit the content in.

If you reach 2000 posts on the thread you can simply copy the relevant points made over to a new thread. It is however standard practice to let the original thread author recreate the thread.

There are a large number of features which can be used on the Forums, including:

J-Mod posts have a gold background