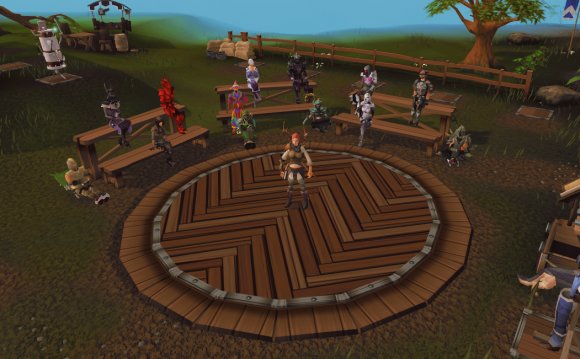 Combat is an event in RuneScape in which two or more players and/or creatures fight.

Combat is based around randomly generated numbers in the form of "damage", which deplete a target's life points. The damage done by the parties involved is determined by their skills and, in a player's case, their equipment among other factors. There is also hit and block chance, the likelihood that a party will land a successful hit. Combat lasts until one participant is killed or flees.

Players can influence their effectiveness in combat in many ways, such as boosting their combat skills via potions or prayers, or lowering their enemy's stats via curses or curse spells. There are also some items that offer special buffs to combat.

There are three methods with which a player or monster may fight in combat: with melee attacks, ranged attacks, or magical attacks. The classes involving these attacks are known as the warrior, the ranger, and the mage. A player's class is determined by their worn equipment and prioritized skills, and thus their class may change as desired.

By bringing weapons and armour for multiple combat classes, and switching between them at will, a player can use multiple combat styles in a fight. This is called "hybridding". Hybridding is often used to gain an advantage in player-versus-player combat, especially to avoid protection prayers that halve damage from a single combat style, and it is a common tactic in large multiplayer battles such as Clan Wars.

Monsters use attacks from one or more combat classes, and the vast majority have a weakness against one particular class. Other monsters have no weakness and may be fought effectively with any class.

There are several variables in combat which moderate an entity's performance. Life points are possessed by players and foes, whereas the other mechanisms are used in foes sparingly or restrictively.

Combat skills are levels possessed by players and creatures that influence their combat proficiency. There are offensive and defensive skills that increase damage, hit chance, and block chance, while there are further skills that augment the others or offer additional options in combat.

These skills contribute to the player's accuracy stat, offering up to 1212 base accuracy at level 99.

These skills contribute to the player's damage stat. The damage gained scales with weapon speed and handedness, though as a base, each level contributes 2.5 damage.

As seen above, proficient melee combat requires training in two skills whereas Ranged and Magic each require only one. However, as such, melee combat makes use of both Attack and Strength abilities.

These skills are used by all combat classes.

Defence raises your chance to block foes' attacks, and it reduces the damage of attacks received. At level 99, Defence provides 1212 base armour and a 9.9% damage reduction against creatures and players.

Constitution raises your maximum life points by 100 for each level. Players start out with level 10 in this skill. At level 99, Constitution provides 9900 base life points.

Prayer is used to grant buffs to combat, such as raising your combat skills, and it offers benefits like item protection, damage upon death, and even the ability to halve damage from a combat style. Using prayers depletes prayer points. A higher Prayer level allows access to more powerful buffs and benefits.

Summoning is used to conjure familiars to aid you. Many familiars will fight alongside you, while others act as a beast of burden, or will heal you and bank your items among many other traits. As with Prayer, the best familiars require a high Summoning level to use. Some familiars are meant to aid non-combat skills, making Summoning a skill used in and outside combat.

While creatures possess life points, and a rare few use prayers or summon familiars, creatures do not have a Constitution, Prayer, or Summoning level.

An entity's combat level is a representation of how tough it is to defeat, calculated using its skill levels; most bosses, however, have an assigned level that more accurately reflects their danger. An entity's combat level can be seen by right-clicking it, though players not in combat and with sheathed weapons will display their skill total instead.

Players can boost their combat skills via several methods, the foremost being potions and prayers, both of which boost the player's accuracy skills, damage skills, or Defence skill. Potions temporarily raise the skill levels seen in the skills tab, the extra levels diminishing by one every minute, whereas prayers maintain an invisible, constant boost until disabled. The strongest combat potions are untradeable and, similar to prayers, require a high Herblore level to obtain.

Constitution cannot be boosted, but a player can raise their maximum life points by equipping high-level armour or by throwing logs on a bonfire. To heal above one's maximum life points, one can consume rocktail or Saradomin brew, soak in the thermal bath at the Oo'glog spa, pray at the Elidinis Statuette in Nardah, or use titan's constitution summoning scrolls.

Neither Summoning nor summoning points can be boosted.

Not only can combat skills be boosted, they can be drained by some creatures, bosses, and environments like the snowy land north of Trollheim. Skill drains can be combated by drinking a restore potion.

As with boosted skills, drained skills will return to their former levels at the rate of 1 level a minute.