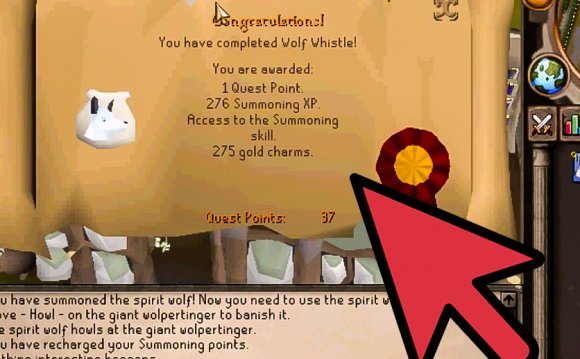 Spirit of Summer is a quest taking place entirely in the Wilderness. It involves the spirit of a young girl, Summer, who seems to be unable to move on to the Afterlife.

The little girl, leading the way

You can start the quest by speaking to the spirit. It can be found out of north Varrock, east from the north road. You can't understand it, even using an Amulet of Ghostspeak, though you will get the phrase "...with..." when using it (which is a reference of "come with me").

The spirit will teleport you to a safe version of the Wilderness. Follow her. As you walk toward the spirit, she will disappear and reappear a short ways away. Continue to walk toward her until you get a message: You feel as if something is pulling at your consciousness. Do you allow it to drag you away? Agree to enter the Spirit Realm.

You see a man (later known as Erik Bonde) who traps the girl in 5 rings. Equip the Ghostspeak amulet and talk to the man.

He doesn't speak but rather answers with an emote. The emote responses are different for each player. Use the Think emote to get him to repeat his emote.

The girl trapped in the rings

Each time the correct emote is performed, one of the 5 rings around the girl will disappear. If you respond with an incorrect emote, all the rings reappear, and you must start over.

After all 5 rings are gone, speak to the spirit girl. You will find her very hard to understand. If you forgot or otherwise did not bring your ghostspeak amulet, do not go back to the portal by the farm as it will be rendered inoperative You can come back any time by meeting her where you first followed her, instead. She wants to meet you at a village near the mountains to the West. Continue speaking to her and she will take you to the village.

Items needed: Below are the locations for the items you will need that can be found around the ruins in the real world, but it is likely faster to buy all the items at the Grand Exchange.

When in the real world, be sure to grab the mushrooms on the hollowed log to the west of the farming patch near the statue. You will need them later.

Speak to the Spirit when you have the items above. She can be found just a little south of the flower patch, directly west of the anvil.

Talk to the spirit again. She will again not talk properly and mention something like "being stuck", "a beast", "washing something" and "a barrel" (indicating the barrel located next to her).

The spirit now wants something to eat. If you have not already done so, go back to the real world and west of the farming patch. Near the statue, pick the hollow log to get Button mushrooms (this requires three empty inventory spaces, although the mushrooms are not needed for the quest and can be dropped once picked). This will cause mushrooms to grow in the spirit realm. Return to the spirit realm where a cut scene ensues. The girl will eat the mushrooms. (Note: if you already picked up the mushrooms earlier, the cut scene will play after the spirit washes her face.)

Building the wardrobe in the real world

The girl then wants you to get some clothes out of the wardrobe she is standing near. Back in the real world, use a plank on the wardrobe with another plank and 4 steel nails (requires 40 construction). This will destroy the wardrobe in the spirit realm. Go back to the spirit world and you will see her using the wardrobe.

Next, she wants to retrieve her doll which is buried under the diseased Limpwurt plant. Once again, go back to the real world. Rake up the weeds, then search the nearby crates for a limpwurt seed (or bring your own).

The patch where limpwurt seed is planted

Plant and wait for it to grow. It will take around 25 minutes. The patch won't become diseased, so there is no need to water it, and don't be afraid to do something else while it grows.

Once it is fully grown, the plant in the spirit realm will disappear. Go back to the spirit world, where during the cutscene, the spirit girl will get her doll. Make sure you DON'T pick the limpwurt plant!, otherwise you will have to grow one all over again! The plant cannot be picked after the doll is retrieved.

Items needed: 1 skull, 5 normal bones. Bones and skulls spawn in the normal realm throughout the farm (where you find the father) or just outside it (use the portal for traveling between the two realms). A skull spawn is also found just east of the farm in the spirit world. Note that you won't be able to see or pick up the skull until after the limpwurt plant has fully grown and you've talked to Summer in the spirit realm.

Once you are there, talk to Summer. She will tell you about an altar that you need to activate to get rid of the Spirit Beast. Before following her down the steps you should get the skull and bones. You will be led to a ladder (in a building on the east side of the farm) which you can climb down to reach the altar.

You need to place offerings on the altar to feed it. Use the skull and bones on the altar. Make sure you do not bury the bones by accident. Summer will tell you that you must use the power of spirits along with the power of the discs in order to trap the Spirit Beast.

If you place the skull and bones on the altar in the real world, they will turn into ashes.

The power of spirits and discs

One of the three discs used to trap the Spirit Beast.

WARNING: If you are experiencing lag, you will not be able to dismiss your familiar quick enough to avoid being devoured. Changing your summoning left-click option to "Dismiss" is recommended in any case.

Runescape- All 99 emotes including quest and summoning