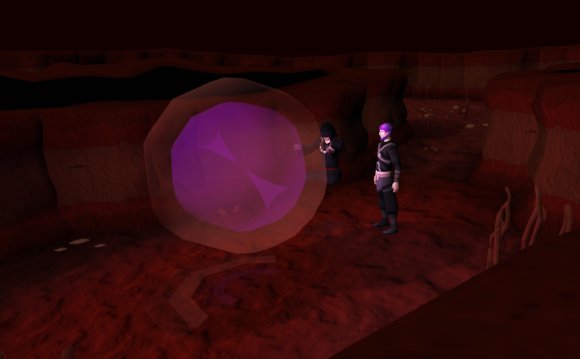 Dangerous Area This is a 'Dangerous' area of RuneScape. If you die in this location, you will lose your items

The Abyss provides an extremely fast method of Runecrafting, but it brings with it significant risks. To gain access you will have to do a small favour for the Mage of Zamorak.

The Abyss entrance is located in level 5 Wilderness, directly north of Edgeville. This is a dangerous area, as you run the risk of being attacked and killed by another player.

You will also be 'skulled' upon entry to the Abyss and your prayer drained. Being skulled means that you risk losing all of your equipped and carried items should you die.

To gain access to this area, you must have completed the miniquest for the Mage of Zamorak.

To begin with, you'll need to find and speak to him. He is situated north of Edgeville near the river.

No items are required, but teleport runes will save a significant amount walking time.

Additionally, an will prevent you from being skulled in the Abyss.

Upon initially speaking to the Mage of Zamorak he will ask you to talk to him again in Varrock.

You will find him in the Chaos Temple in south-east Varrock. Once you have spoken to him for the second time, he'll ask you to help him gain access to the rune essence mine.

If you accept, he will give you a scrying orb that he has cast a standard cypher spell upon so that it will absorb mystical energies that it is exposed to.

Your job is to simply teleport to the rune essence mine from three of the following locations in order for him to learn the spell.

Once you have visited three of the locations (there is no need to mine any essence), the orb will begin to glow indicating that it has absorbed enough teleport information. Take it back to the Mage of Zamorak in the Chaos Temple and speak to him to receive your rewards.

All you need to know, and more, about the game world. How to get started and how to develop your character.
Source: services.runescape.com