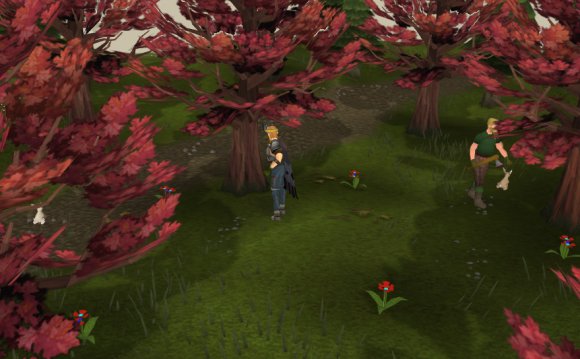 You can start this quest by speaking to Achiettes outside of the Heroes' Guild. in southern Burthorpe. She will talk a bit about how great the Heroes' Guild in a completely unbiased fashion. Ask if you can apply and if you have all of the quest requirements you can begin. She will tell you about the three items required for admission into the Heroes' Guild: An Entranan Firebird feather, a Master Thieves' armband, and a cooked Lava Eel.

Go to the end of White Wolf Mountain just to the north of the gnome glider. To get here, you can either walk or take the gnome glider if you have completed the Grand Tree. There are rocks obstructing your path to the ladders, so right click them and mine them (a pickaxe in the toolbelt works here).

Go down the southernmost ladder and you will find yourself in the Ice Cavern.

The Ice Cavern is difficult to navigate and filled with level 74 Ice Giants, level 78 Ice Warriors, and level 60 Ice Spiders. These monsters may or may not be aggressive depending on your combat level. At first, you should be at the green ladder. Run west to the blue ladder and climb up it. Climb down the easternmost ladder and you should be at the yellow ladder. Follow the passage north, east, and south until you reach the red ladder. Climb up that ladder and then climb down the ladder northeast of that one. You should be at the purple ladder and inside a room with ice warriors and the Ice Queen. Now all you have to do to reach the Ice Queen is run north. What a shame, you were just starting to have fun with the ladders!

The Ice Queen is level 110, has 5500 hitpoints and attacks with melee. She has no listed weaknesses. The Ice Queen also cannot be attacked from afar over the Ice Throne or any other objects. She is in a room full of ice warriors, so if those are attacking you fight the Ice Queen behind the throne.

Kill the Ice Queen, pick up the ice gloves and leave the cavern.

Bank all armor and head to Entrana, which can be travelled to by speaking to the monks in Port Sarim. The Entrana firebird is on the northern half of the island west of the law rune altar. It only has 50 hitpoints, so it should not be difficult to kill for any prospective heroes.

With ice gloves equipped, pick up the fire feather. If you plan on doing either Desert Treasure or the final battle of Recipe for Disaster in the future, hold onto the ice gloves.

You can start by using the Port Sarim Lodestone teleport spell and heading a few steps north to the fish shop. Speak to Gerrant and tell him you want to catch a Lava Eel. He will tell you no ordinary line can catch anything in lava and that you're going to have to make some altercations to your rod before attempting to fish. He will give you some Blamish snail slime. Now buy a fishing rod from Gerrant (if you don't have one in your inventory already). Get the Harralander and put it into your vial of water, creating an unfinished Harralander potion. Now use the Blamish snail slime on the unfinished potion to get Blamish oil. Apply the Blamish oil to the rod and you've got yourself an oily fishing rod.

Now it's time to fish the Eel. Lava Eel can be fished in the lava rivers in Taverly Dungeon and the Lava Maze. Since the Lava Maze is deep in the wilderness and not a popular option the guidewriters aren't going to get into that here, but if you are feeling like Evil Knievel today and wish to fish for lava eels in that area check out the Lava Maze guide.

To prepare for your volcanic fishing trip, take out some armor, a weapon, decent food, an anti-dragonfire shield, and of course your oil fishing rod. Cast Taverly Lodestone teleport, head west across the bridge and then south. Next to the wheat field should be some steps. Go down these stairs and you will be in Taverley Dungeon.