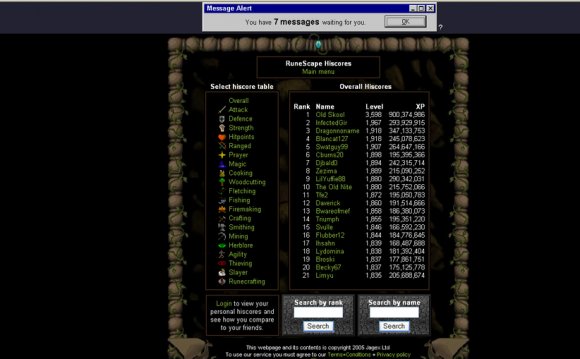 DefenseIs a combat skill on RuneScape Classic. This skill, when raised to higher levels, will decrease the chance of an attack inflicting no damage on the player. Defense does NOT decrease the amount of damage a player takes from attacks. To increase pure damage survivability, one should instead raise their Hits level.

There are eight general armour types in RuneScape Classic, each requiring a specific defense level to equip. As players raise their defense levels, they are able to equip better armour that offer a higher Armour bonus. A higher Armour bonus does NOTreduce the damage taken, rather it reduces the chance of being inflicted damage. Some players, more commonly referred to as Pures, choose to have a lower level in Defense (and often Prayer and Magic) in order to have a much higher Hits level with a far lower combat to avoid being killed in three hits, to increase their potential to defeat a balanced character

Defense can be trained in combat with either the Controlled or Defensive buttons on the combat window selected in a fight.

To Train Defense, Use the Defensive( 3) option

In both cases, = the amount of Hits experience received from the kill. This is different for each opponent, and unlike in RuneScape 2, is unrelated to the opponents' Hits.