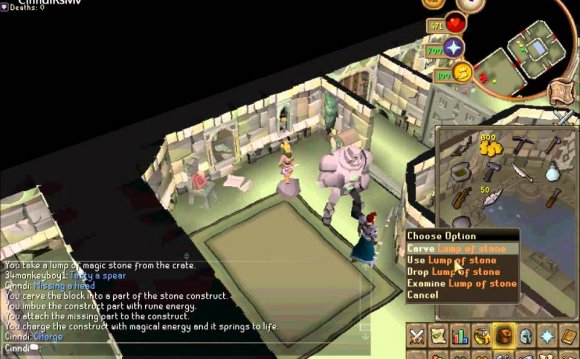 Welcome to my 1-99 P2P Melee guide for RuneScape 3 in the Evolution of Combat (EoC). This guide is regularly updated to incorporate recent updates. There are a few routes to consider in achieved 99 in all 3 skills, including:

The combat skills are some of the easiest and most fun skills to get to 99. Getting 99 in attack, strength, and defence will give 99 constitution as well since constitution gains EXP at a third of the rate as the others, so you are effectively killing four birds with three stones! See below for each of these methods.

Equipment is the most important factor for quickly leveling-up in combat. The table below shows the best equipment for each level. Bear in mind that the best weapon for your level might not be the best weapon for a specific monster; always take into consideration the monster's weaknesses. Don't worry though, I will note the monsters' weaknesses throughout this guide so you don't have to look them up yourself.

Also note that a Full Void Knight Melee Set will increase melee accuracy by 10% and melee damage by 5%, therefore increasing the speed at which you can achieve 99. The set requires Level 42 in all combat stats and 22 in prayer. 42 summoning is not needed.

If you want to get 99 attack, strength, and defence as quickly as possible, this section is for you.

Levels 1-30 should take approximately one hour per skill and can be done on Troll Brutes. Here are their stats:

Troll Brutes are found in the northernmost cave in Burthorpe. They regularly drop food which you can eat for sustenance. Although they are weak to air spells they only have 50 hitpoints so can be killed in one hit.

Levels 30-60 will take about three hours per skill, maybe a bit longer, and can be reached by fighting Rock Crabs. Here are their stats:

Rock Crabs are found just north of the Fremmenik Lodestone, along the coast. They have fairly profitable drops and also drop a fair number of gold charms, which are useful for summoning. They have the best Hitpoints-to-EXP ratio at this level and can be killed in under 15 seconds with the use of abilities.

Levels 60-70 will take around two hours per skill and is all done on Hellhounds. Here are their stats:

Hellhounds are found in the depths of the Taverley Dungeon and have a resource dungeon for better spots. They have no drops but are a very good source of gold charms, which are useful for summoning. They also drop a lot of spirit gems and are a source of hard clue scrolls. They are aggressive for ten minutes and with the use of Soulsplit or Guthan's Armour Set, they are quite AFKable, despite their good EXP rates.

Levels 70-90 should take around 15 hours per skill if using Frost Dragons. They require 85 Dungeoneering to reach but are well worth it. Here are their stats:

Frost Dragons are found in the Asgardian Ice Dungeon Resource Dungeon and are incredible for EXP as well as profit. Their bones sell for around 16, 000 each, meaning that each inventory can sell for around 450, 000. The downside is that you'll require super-antifire potions for the best EXP per hour. However, normal antifire potions and protect-from-magic negate nearly all damage from Dragonfire. Using a Demon Horn Necklace and a Bone Crusher can sustain your player for as long as you need, provided you are using Soulsplit for healing. If you don't have Soulsplit, a Guthan's Armour Set is a reasonable replacement. If you don't have 85 Dungeoneering then you should continue training on Hellhounds. Hsowever, even considering the time taken to achieve 85 Dungeoneering, Frost Dragons are still faster to achieve level 90.

Levels 90-99 will take a few days. There are several good ways to achieve 99 but the fastest is to complete the Fight Cauldron Minigame. I'm not going to go into the entire lengthy strategy here, but it requires the Brink Of Extinction to be completed so may not be available for everybody. Aside from that, Waterfiends are probably the best EXP at this level if using Drygore weapons. If not, continue to kill Frost Dragons. Here are the Waterfiends' stats:

Despite being weak to bolts, Waterfiends are easily killed with Drygore weapons and are the best droppers of crimson charms in the game.