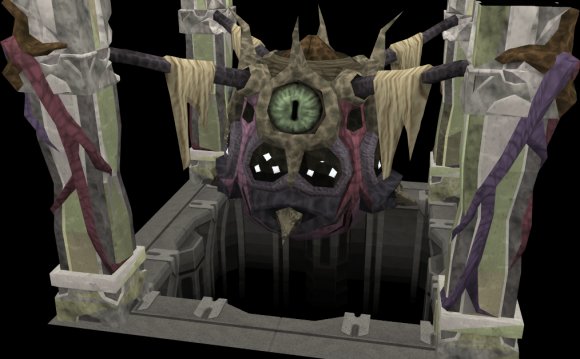 This boss will constantly heal itself by devouring bovimastyx corpses off to its side when it has lost more than half of its life points. It is vital to block the body or bodies to prevent it from healing; it is still possible to attack while doing this. When soloing, there will be only one carcass; in a group, there will always be two, but the behemoth will only heal itself once in the dungeon. It is advised to wear the strongest melee armour available and use the Protect from Magic prayer. One strategy consists of two melee players blocking the behemoth that can take its attacks handily; meanwhile, the rest of the group can attack unscathed. If you or your entire group die when it reaches less than half of its life points, it will heal itself to full health as soon as you re-enter into room. It can be countered by reducing it to almost half of its life points and then teleporting using a personal gatestone . Restock on food and reenter the room again to finish it off. In a group, it is strongly recommended that all players enter the boss room all at the same time for a faster kill.

This boss has thick rock armour which prevents all melee and ranged attacks from doing damage unless broken down; however, Magic attacks are capable of piercing it. Wield a pickaxe and attack it until you break through it all, then switch to your normal weapon and attack as normal, or have a pickaxe on your tool belt and it will be used automatically alongside melee attacks you perform. If you enter without a pickaxe in your possession, and you have none on your tool belt, one will be in the corner. There is a bar on the top of the screen showing the progress of the armour. Breaking the armour does not give you Combat or Mining experience. The Bulwark beast attacks at all times with all three forms of attack. Although in any other case it would be more helpful to use the prayer to protect from the combat style you are weakest to, the beast drains the prayer points of all players who it isn't attacking unless they are using Protect from Magic or Deflect Magic. As such, activate this prayer whenever it turns away from you.

Stomp is something of an oddity; you only fight its head. When fighting this boss, ranged is recommended, followed by melee. If you use melee it will follow suit, which renders prayer besides Protect from Melee not useful. The boss is immobile, using all three types of combat and has three divisions of life points. Stomp uses four kinds of attacks. When within melee range, it will smack a player with one of its arm-like mandibles. Its ranged attack is to throw a rock at you. Its magic attack is to shoot a ball of energy at a single player; it will only use this attack once it is in its second phase. Its special attack, which is only used in its final stage, is to throw a large rock at a player's location; any player that is within one square of where the rock lands will take massive damage, equal to 25% of their life points. The special attack can be half-negated with the Protect from ranged prayer. Whenever the boss drops to 66%, 33% or 1% life points, it will perform a special feat. There are two lodestones next to the portal that Stomp appears to be protruding from. After a third of the boss' health bar has been depleted, it will cause a small-scale earthquake, causing rocks and two smaller crystals to fall. Take the crystals that fall quickly, as the rocks will stop you from moving and can block them off. If you have a pickaxe on your toolbelt, you can clear a path by mining the rocks. Activate each of the lodestones using the small crystals. Once both of them are placed, Stomp will enter the next stage. If you fail to charge the lodestones within a set period of time, Stomp will heal 1/3 of its life points and you must repeat that stage. Once the third stage is complete, the portal will close and Stomp will die. The rocks will be cleared from the room shortly after the start of a stage, and when the boss is finally killed. Ironically, Stomp is the only behemoth-type boss that can't stomp on a player standing underneath it.