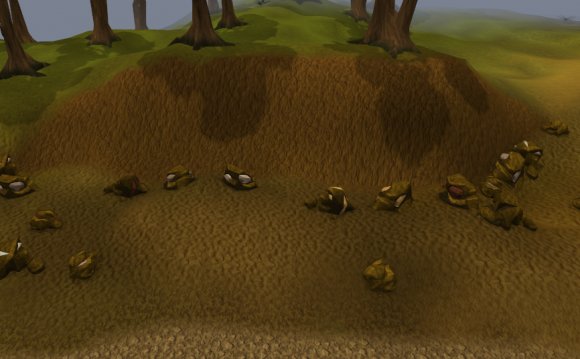 The Lava Flow Mine is one of the most important locations of Keldagrim, being the main source of the dwarven city's power supply. It is run collectively by the Consortium and overseen by Foreman Jaak. The mine was first released along with the quest King of the Dwarves on 4 January 2011. Later, a training area associated with the mine was released on 16 May 2011. It is a place for players to train Mining quickly without gaining ores (though gems may be acquired) and by pleasing the Liquid Gold Nymph players may attain pieces of the golden mining suit. A Mining level of 68, a Smithing level of 70, and a Strength level of 77 is required to complete the quest and is therefore a requirement to use the mine.

The Lava Flow Mine acts as a geothermal power plant, using Gielinor's thermal energy (the lava) to turn water into steam, which in turn operates the various mechanisms around Keldagrim.

Mining urns do not work at the Lava Flow Mine, but Bonus experience and clan avatars experience boosts do.

Located in Keldagrim, the Lava Flow Mine is used as the primary power source for the city. It creates steam, on which many of the city's machines work (similar to the Blast Furnace). It is a vital part of Keldagrim - the Green Gemstone Director calls it the single most important piece of machinery in Keldagrim.

At the start of King of the Dwarves, a cloaked figure blows himself up in the mine, causing a cave-in, which wounds six of the miners. He blows up the secondary boilers only, and black guard troops come to fix them very soon. They leave the miners under the rubble, for the player to mine them out. If the boilers weren't fixed, they might have exploded, causing further deaths and leaving most of Keldagrim without power for days. After the quest it seems 3 of the 6 miners have died: 2 died immediately, and 1 more died of his wounds later on.