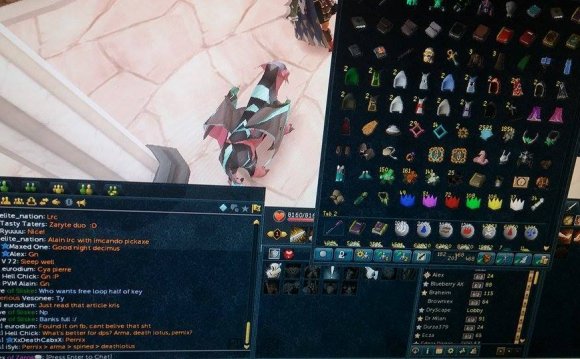 About me
Back in December 2007, I created the Runescape Classic Fact Sheet - responsible for mass accumulating the early history of Runescape, its famous (& infamous) players and most interesting facts. A great amount of the history-related information on wikia nowadays was derived from the RSC Fact Sheet. I've also interviewed Rab (the first player ever + temporary J-Mod), Paul Gower, major bug abusers, the kids behind the Cheesy018 ordeal, and much more.

A few years later I created a "Runescape 2 Fact Sheet" and did the same.

Introduction
Every player wonders who the richest players are and what their story is. Yet few actually know. Well, I have had a little bit of spare time lately and decided to find out. What I discovered actually shocked and surprised me, given the amount of confirmed wealth.

We all know of the famous stakers, dicers or merches who have achieved 100b, 200b, 250b or are even in the 300b range. A few names that come to mind are: Fishy, Stokenut, KO, Le Me, Starrychelx, Md3w and many others. These players are rich but aren't the richest. By far.

However, those players above 500B and even in the trillions are never mentioned. They're quite hard to find. But they exist. I've found a total of 4 Trillionaires, 3 confirmed and 1 unconfirmed. Also keep in mind that if you hang in World 1 GE long enough, you will see some crazy amounts of wealth. Here is what I've gathered from my research.

Mostly a former staker and dicer heavily involved in the scene. Merched Third-Age, which he lost ~90B. This is only a part of his bank, as he has it mostly spread throughout accounts. He was said to be a very crazy, wild staker. His current whereabouts are unknown (I don't have a good connection within the staking community).

So I spoke to a player everyone in RS should currently know (very high rank) and he gave me a referral to a top-tier merchanting clan. From there, I spoke to a couple of members. Several of whom are currently in the 100b to 250b range. Here is his story:

Twilight Ash made his first 3b via merchanting. Then he got into the world of gambling when it was legal. He rose to 300b. After this, he disappeared for a couple of months. When he returned, his wealth rose up to 1 trillion via gambling. Then agex banned gambling.