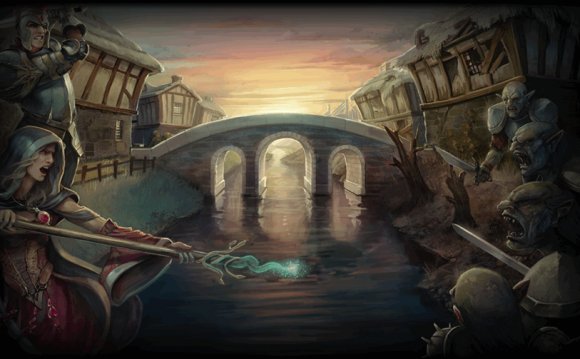 Summoning was a much anticipated and much talked about skill before it was released. Due to the large amount of information available about its history (prior to being released), this article has been created to detail the history of the Summoning skill. The information in this article is what was known prior to the skill's release on 15 January 2008.

Summoning was mentioned in Issue 20 of the God Letters[help] when Saradomin mentions the Mysterious Old Man who apparently roams RuneScape looking for people who are "of such low intellect that they cannot respond even directly to their own name" and would teleport the aforementioned player over great distances (using a mysterious type of rune) if they did not respond in an attempt to "test" Summoning.

On 31 March 2004 a Behind the Scenes-like article was published, which included the updates of the next few years. Within these, there were also "Summoning spells - summon skeletons, demons, etc...!".

Some degrees of Summoning were introduced in, both from NPCs and players.

Many NPCs summon monsters and other magical energies; for example, Malignius Mortifer summons ghosts, skeleton mages, skeletons and sometimes fungi when he fails to summon another creature, though he will tell you himself, that necromancy has nothing to do with summoning. Wizard Grayzag, at the top of the Wizard's Tower, used to summon imps to fight for him when he was attackable, but according to Malignius, he is also a Necromancer. Strongbones also summons four Skoblins to fight alongside him. And Melzar the Mad summons cabbages from his garden.

On 19 February 2007, the Tower of Life quest and the subsequent Creature Creation activity were introduced, where players could "summon" certain creatures. At the time, some players speculated that this was all there was going to be to players' summoning abilities. After the Tower of Life quest came out Mod Ash stated on the forums that this was not summoning and that it was more of a test to see how the servers would handle summoning. He also stated that there was more to come in this area.

Originally, Summoning was considered as an addition to Magic, leading to the creation of life runes. They were never released, but some players managed to deduce their existence. After the development of alternate spellbooks, Summoning was changed to become a skill of its own, rather than an add-on to Magic as that skills was already "filling out".

In February 2005, Mod Bennett wrote the initial brief for Summoning, which wasn't well-received. The development was halted, but it was revived in mid-2005, after Jagex moved into a new office. A new brief was written by Mod Wilson, this time calling the skill "Animal Lore", and with more focus on non-combat aspects of the skill. Some of the brief was considered technically infeasible by Jagex due to game engine restrictions, and development was again halted. The brief was then modified to use a different approach, allowing the skill to again be named Summoning. Development based on this concept began in September 2006, shortly before the release of the Hunter skill on 21 November 2006.

A large portion of what is known about the development of the Summoning skill comes through the four Development Diaries that have been released on the topic to date. Several desktop wallpapers were also released, but it was not possible to tell much about the nature of the skill from these.

An illustration from a Development Diary.

One of the most controversial aspects of the skill is that it increases the maximum combat level to 138. Since it is not available to free-to-play players, many have commented that this is unfair to them, since their maximum level will remain 126. Players once speculated that Summoning would be available to free-to-play to balance this, with a Jagex moderator even "confirming" it, however contradictory statements were given from Paul Gower and at least one other Jagex moderator. The fourth Development Diary, however, confirmed that it was a members-only skill shortly before its release.

The Development Diaries indicate that Summoning was expected by Jagex to be a difficult skill to understand. A quest, named Wolf Whistle, has been developed to serve as a tutorial for the skill and was released along with the skill, much like the connection between the Druidic ritual quest and Herblore. Its starting point was known to be in Taverley, giving further credence to the confirmation by Paul Gower that Summoning was be members-only.

With the final development diary being released as of the 9th of January 2008, speculation on whether or not summoning will be available for both free players and members ended with the note: "'It's my favourite members' skill that I've helped to release, ' says Mod Mark."

If a player stood next to the table on which there is a green potion on the first (American: second) floor of the Magic guild, they could see part of a pet store in Yanille. It could also be viewed from a different angle by standing on the Yanille city wall. This is only visible on low detail. Every five minutes or so, the Pet shop owner would exit the shop and take her bulldog for a walk around Yanille. When you talk to her, however, she would say that she was too busy preparing for the grand opening to talk.

How to make RuneScape your background