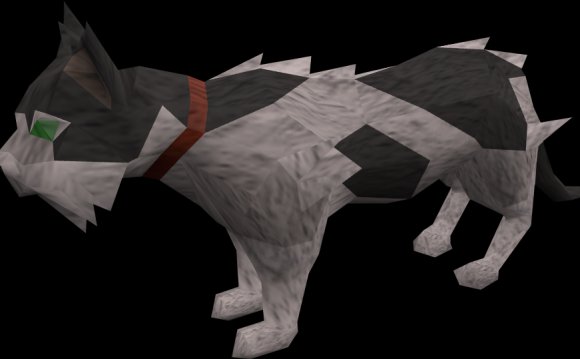 [view] • [talk]A Cat training medal is an item that members can obtain by having their cat or kitten catch 100 rats (hell-rats are included), and then talking to Gertrude in Varrock. This item has no effect when worn, and is only for show. If players lose their training medal, they may talk to Gertrude to get another one.

The cat must catch the rats before it turns into an overgrown cat, which cannot hunt vermin. In order to claim the medal you have to speak to Gertrude before your cat turns into an overgrown cat otherwise she will not recognise that you have caught 100 rats. Players who only have these must buy another kitten from Gertrude, or those who have done the Ratcatchers quest can train their cat into a Wily one. Note that training overgrown cats into wily cats resets the mouse kill counter to zero (the counter will still reset to zero even if you had previously killed 100 rats and obtained the medal).

A house in West Ardougne.

The best place to catch rats is in West Ardougne. On the west side of the city, players can enter a small house containing an anvil, where there should be two rats inside. The most effective strategy is to close the door, trapping the rats inside. The rats respawn very quickly and are confined to a small place, so there is a higher and faster chance of successful catches.

An alternative is the Hazeel Cult Hideout, beside the stairs which has 2 rats which respawn very quickly.

Another great place to train rat catching is in Evil Dave's basement which is located downstairs in the house to the west of the Edgeville bank (requires starting the Recipe for Disaster Evil Dave sub-quest for entry). Evil Dave's basement has a large number of hell-rats in a small basement that your cat is able to catch. If your kitten eats enough hell-rats then it turns into a hell cat unless you already have a hellcat in your bank. Even though your cat turns hellish it still counts towards the number of rats caught and if you want your hell cat to turn back into a regular cat just feed it a bucket of milk. Many people arguably say this is better than the West Ardougne area because it requires less moving about and there are more rats.