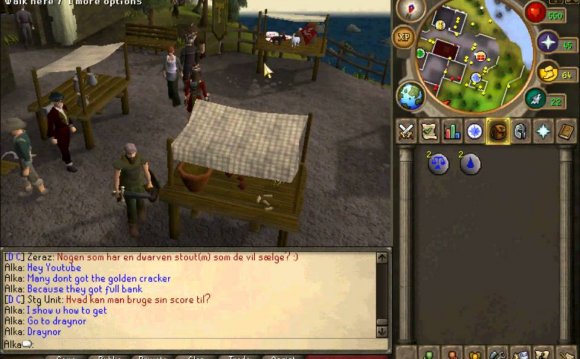 Once a player uses it on another player, they receive a Golden hammer. This is a "fun" item, which is wielded in the same fashion as a maul. If the hammer is misplaced somehow, one can obtain a replacement golden cracker (not the hammer itself) from Diango once again in order to obtain a new hammer.

When someone pulls a cracker on another player, the second will receive a message saying "You pull a golden cracker, and (name of first player) receives the prize!"

The Hammer can be retrieved from the cracker an unlimited number of times by any user. This item has not been discontinued, and new accounts still have access to the golden cracker and hammer.

Although the golden hammer was intended as a fun item, it serves as a multi-purpose item by having many of the same functions as a normal hammer. The golden hammer can be used for skills, such as smithing or construction, which would ordinarily use a hammer, but since it can be wielded, it was popular to use when training these skills to save an inventory space. Since the release of the toolbelt its use has diminished, as a normal hammer can be stored in the toolbelt.