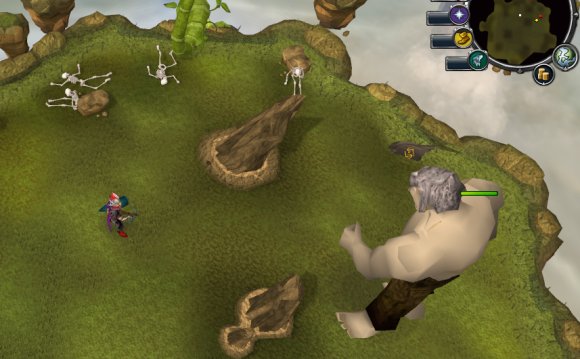 Grim Tales is a master quest that revolves around collecting a couple of rare items for Sylas, a peculiar collector. It contains many references to various real-life fairy tales.

Talk to Sylas, who can be found west of Falador and south of Taverley, at his farming plot just north of the Witch's House. Sylas, a collector by profession, is in possession of some "magic beans", which he is willing to part with if you can bring him a couple of "trinkets" for his collection.

From Sylas, head to the White Wolf Mountain; Grimgnash is located on the north-east corner. The apparently angry griffin says that it cannot get to sleep because of the howling wolves, and demands a bedtime story from you, failing which he would eat the player.

If Grimgnash doesn't like the story, he will attack you and deal 1000-1500 life points of damage.

Grimgnash says he loves stories with death, fire and destruction. Proceed to narrate to him a bedtime story by selecting the options which sound the most violent (the numbers in brackets are for those controlling the dialogue using the keyboard):

(At this point, you can answer with any of the remaining choices.)

Once Grimgnash is asleep, steal a feather from the pile next to his nest.

Location of the tower

Next, travel to the tower between the Goblin Village and Ice Mountain. If you attempt to get in by the door of the tower, Miazrqa will stop you. In order to locate Rupert, you will need to go around to the back and climb over the crumbling wall (requires 58 Thieving).

Talk to Rupert to find out how to get up the tower, and he suggests climbing up is the only viable option. Ask if there is anything up there that would help and he will throw down his beard. Climbing up the beard requires level 59 Agility (as does climbing back down).

Rupert imprisoned in the tower.

Rupert explains to you his plight - His gnome friend, Winkin, disappeared when he was delivering ogleroots to the market in Draynor Village. When he asked around, he found that Winkin was last seen talking to a witch. On still further investigations, he came upon Miazrqa, the arrogant princess outside the tower; as it turns out, Miazrqa is related to the witch last seen with the gnome.

Rupert admits to flirting with the princess to pry information out of her, but that when invited back to her tower, she slammed the door shut behind him, locking him in. And so, regrettably, he cannot give you his helmet as the princess has stolen all his armour.

Rupert asks you to talk to the princess and convince her to release him. Climb down the tower using the dwarf's beard and talk to Miazrqa, who says that she will happily release the dwarf if you can return her pendant, stolen by a mouse in her second cousin's (twice removed) house, a.k.a the witch's house, south of Taverley.

Go to the basement of the witch's house. Make sure you are wearing a pair of leather gloves, so as to avoid an electric shock from the gate and lose over 700 life points.

Once you successfully play the melody, a compartment will open revealing three items in it - a shrinking potion recipe, a to-do list and 2 shrunk ogleroots. Read the recipe to mix a shrinking potion - use a clean tarromin with a vial of water and complete it by adding the ogleroot. (make 2 shrink-me-quick potions now as you will need one later in the quest)

With the potions made, go back up to the small room leading into the garden. Drink one potion while standing next to the 'Witch Glyph' on the wall, near the mouse hole. Due to the potion and the glyph's magical properties, the player will suddenly shrink and enter in the mouse hole.

There are aggressive mice in the mouse hole. Make sure you have prayer and/or good food just in case. Also, be sure to bring a teleport of some sort, or if you want to use the home teleport, there is a safe spot behind the rock where you find the pendant. Do not attempt to go through the grates as this will cause you to leave, voiding the glyph's magic.