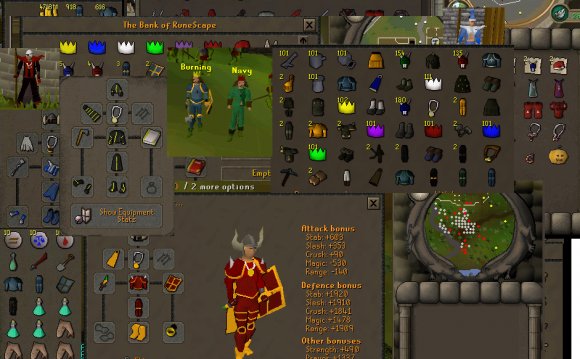 Ahrim the Blighted is the oldest and leader of the six Barrows brothers. Ahrim used to be the only magic-based brother until the release of Akrisae the Doomed with the Ritual of the Mahjarrat grandmaster quest (though is the only one available to players who have not completed the quest). Ahrim also casts Pre-Evolution of Combat Curse spells on the player that reduce Attack, Strength and Defence levels with each successful hit.

Ahrim's set effect, Ahrim's Blight, gives each successful attack cast by Ahrim a chance to lower a player's Strength level. Although the damage from the attack itself can be partially blocked by protection prayers/curses, the set effect cannot. Therefore it is advisable for a player to bring something to restore a player's Strength level back to normal if using melee, such as a restore potion or greater. This effect is accompanied by an animation as well as a sound effect.

Ahrim's crypt is located in the centre of the Barrows area, and he attacks with magic, casting Fire Wave with his staff.

Ahrim is weak to arrows, therefore strong ranged weapons such as the zaryte bow, crystal bow, dark bow or magic shieldbow (sighted) are ideal. Lower levelled bows are not recommended due to his high Defence level and due to low levelled bows not being powerful enough. Ahrim has a tendency to cast Curse spells much more often than his Fire Wave, so using melee is not advised unless the player has a lot of stat restoring potions, or is under the effects of an overload potion.

Using the curse Soul Split can also restore some life points to those who can use it, due to the fact that he does not cast Fire Wave as often as his curse spells, though a player must watch their life points just in case.

Rise of the Six

Ahrim returns with his 5 brothers in Barrows - Rise of the Six, greatly enhanced by Sliske's experiments into the Shadow Realm, and this time attacking with blood spells. As when fought normally, he retains his set effect, and also has various other abilities. These include: