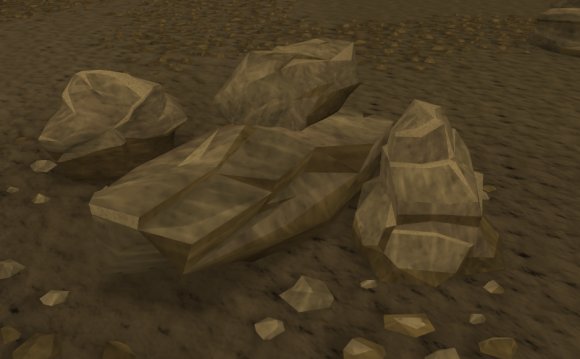 The Living Rock Caverns is a members-only area that was added on 17 September 2009. The area was designed for players with high levels in Fishing and Mining.

Players can enter the caverns from the north in the Dwarven Mine under Falador and Ice Mountain, by climbing the rope attached to the crevice just south of the north-eastern entrance ladder and east from the Keldagrim Mine cart.

There are no quest or skill requirements necessary to enter this area. However, it is a dangerous area, as aggressive level 92 living rock creatures guard the resources, so training skills here may very well be interrupted regularly and dangerous. Protection prayers can be used to avoid most damage. It is also possible to lure the creatures at each resource, so that the resource can be gathered without being attacked, and some resource areas even have safe spots. However, combat is considerably more difficult to avoid if travelling between the resource and bank deposit.

For players of low combat or wishing to spend a long time in the cavern, it may be advised to train with other players on the official Living Rock Cavern world 84.

The Living Rock Caverns are found below the Dwarven Mine beneath Ice Mountain, near Falador. Defensive armour is recommended, as the living rock creatures are aggressive and high-levelled. There are several main ways to get there:

The image on the RuneScape home page on the day of its release.