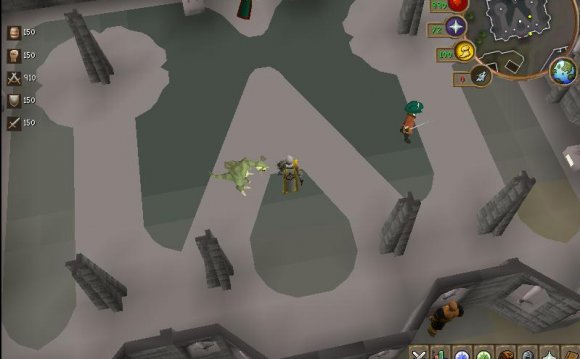 The dragon defender is the eighth and final defender obtained in the Warriors' Guild, and is held in the off-hand in place of a shield. It is dropped by Cyclopes on the top floor of the Warriors' Guild, but only if the player is wielding or carrying a rune defender or higher. Like all defenders, it allows the use of both dual-wielding and shield abilities, and provides a 3% accuracy boost.

Wielding a rune or dragon defender can cause a Cyclossus to spawn, which has a much higher drop rate of the dragon defender. In addition, using the multi-token option in the cyclopes room increases the chance of receiving a dragon defender as well as encountering a cyclossus.

Some players choose to train combat on cyclopes. They should note that wearing a dragon defender whilst fighting the cyclopes may lead to the summoning of a cyclossus. Many players consider fighting the cyclossus difficult, troublesome, and costly in terms of food. Players who desire to train on cyclopes, but do not wish to confront a cyclossus, should use alternatives such as an off-hand weapon or shield. Also, they may choose to use a two-handed weapon; do note acquiring a dragon defender requires a rune or dragon defender to be wielded or in the player's inventory.

The dragon defender was very popular before the Evolution of Combat, as it was the only off-hand melee weapon in the game. It has since been displaced by ordinary dragon off-hands and stronger weapons like the enhanced excalibur.

When using the defender in combat, it will randomly block a hit, similar to Saradominist and Zamorakian warpriest armour. This effect was added with the release of Legacy Mode. This has a chance of 1/15, reduces damage by 50%-100% and provides +20% accuracy for the next attack.

The defender reduces the damage of this attack by X.

For an exhaustive list of all monsters known to drop this item, see here.
Source: runescape.wikia.com