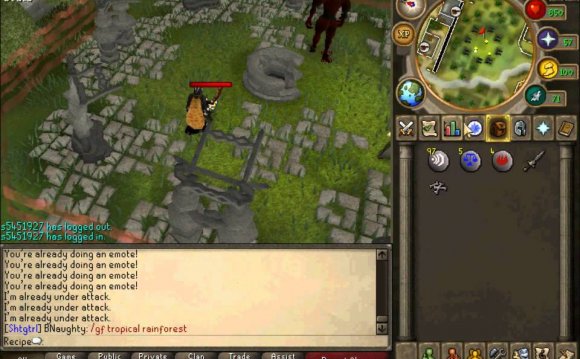 Dragon Slayer is a free-player quest. This quest is regarded as the most difficult for free-play players. Upon successful completion, players gain the ability to equip the rune platebody, blue d'hide body, and mystic robe top, and their variants. It was also the last quest in RuneScape to be released before the addition of membership.

The Guildmaster offers you the quest.

To start the quest, speak to the Guildmaster in the Champions' Guild, located just below the southern entrance of Varrock. After talking to him, you will be directed to Oziach, located in a tiny house situated north of the Edgeville lodestone.

Oziach says that, to be able to purchase a rune platebody from him, you will have to slay Elvarg, the mighty female dragon, residing within Crandor Isle. He will tell you to re-visit the Guildmaster for information on how to kill Elvarg.

Travel to Lumbridge and speak to Duke Horacio on the 1st2nd floor[UK] of the Lumbridge Castle. Ask him about "a shield that will protect you from a dragon's breath", and when he asks you which dragon you're going to use it to fight against, tell him that you will be slaying the fearsome Elvarg of Crandor.

To reach the island of Crandor, you need to obtain a Crandor map, but, for the safety of the people of Asgarnia, the map has been torn up into three pieces by 3 surviving wizards. The wizards, Melzar, Thalzar and Lozar each took a section of the map and stored it, to prevent anyone from travelling to the perilous island.

You can obtain the map pieces in any order.

Melzar's map piece is found within Melzar's Maze, found south of the crafting guild. To progress through the maze, you will have to get past several locked doors, using keys that the monsters within hold. With each group of monsters, there is one specific one that has a specific trait which differentiates it from the others, and can be used to find the respective key quickly.

The doors you must use the keys on.

Once you enter the maze, you'll find yourself in a large room containing zombie rats. To get the red key, you must kill the small zombie rat with the long tail. Once you have obtained the key, open the north-western door, and proceed up the ladder.

The second room is home to the ghosts. The orange key is dropped by a ghost with a cape, but not a hood. After obtaining the key, head through the middle door, second from the north on the eastern wall, and then climb the ladder.

The third room has skeletons in it. To obtain the yellow key, the skeleton with a round shield must be killed. After killing it, use the key on the south-western door and keep climbing down the ladders until you reach the basement.

The basement contains two zombies. Unlike the other rooms, there is no way to tell which zombie will drop the key, but one of them will drop it. Then proceed through the blue door.

Once the demon is defeated and you take its key, open the final green door and take the map piece from the chest. You may now climb up the ladder and exit the building through the entrance, or can you can teleport out.

Items needed: An unfired bowl, a Wizard's Mind Bomb, a lobster pot or a crayfish cage (toolbelt does not work), and silk.

A player talking to the Oracle atop Ice Mountain.

Travel to the Ice Mountain, west of Edgeville and north of Falador, and climb to the northern-most part of the mountain and speak to the Oracle, who is standing beside a tent. She speaks to you in a riddle, which holds the answer to the location to one of the map pieces:

To obtain this piece of the map, you'll need:

Once you have obtained all these items, venture down into the Dwarven Mines, just north-east of the Falador lodestone. The mine contains a room with a sealed entrance door in the north-east part of the mines, just north of the scorpions. When you've found it, use all the items on the Magical Door. Be sure to use the Wizard's Mind Bomb with the door, as the left-click action for it is to drink it.

Opening the magical door within the Dwarven Mines

When you open the chest inside the room you get the following message, written by Thalzar:

Be sure to search the chest after reading the message in order to obtain the map piece.

You can directly head to confront the perpetrator, eliminating the need to visit the Guildmaster and Goblin Village.

Asking the Guildmaster about Lozar's map piece, reveals that she had hid the map section in a safebox in her house in Lumbridge. Unfortunately, she was killed during a goblin raid, and the creatures looted everything from the homes. The Guildmaster recommends you speak to someone in the Goblin Village.

The third map piece is in the possession of a goblin named Wormbrain, who is being held at the Port Sarim Jail. Head there and speak to Wormbrain, who admits to stealing the map from a frail old woman and getting caught while trying to escape.

There are three ways to obtain this map piece:

When you spoke to the Guildmaster, he told you that there is a ship for sale in Port Sarim; at the port docks, talk to Klarense to be informed that the ship is damaged. Nevertheless, buy his boat, the Lady Lumbridge, for 2, 000 coins. Board the ship and descend the ladder. You must now fix the holes by using regular planks on them, which also consumes 30 steel nails on each hole.

Fixing the hole within the Lady Lumbridge.

Go to Draynor Village and talk to Ned, located in the house just north of Miss Schism. He sells and crafts ropes. Make sure to bring your map and ask him to captain the ship and assist you in sailing to Crandor. He agrees and asks you to meet him on your ship in Port Sarim.