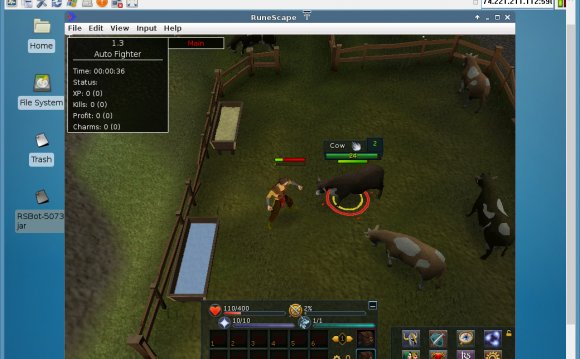 Ladies, gentlemen, these players stand accused of conspiring with evil forces to cheat! It has been made clear by their actions that they are bot-users!

Not once, but THRICE were they seen to seek an advantage over fair-playing men and women by using forbidden methods!

These bot-users…these…THINGS, have decided that it is quicker and easier for them to use a soulless machine to harvest the bounty of our lands. How much gold have they swallowed? How many trees have they defiled? How many rocks have they CLEAVED with their filthy instruments?

We should consider also how this example of the sinful breed exemplifies the grotesque physical changes that come over the cheater and rule-breaker. And with justice in your hearts you must now pass an appropriate sentence upon them.

The Botfinder General lies in a deep, dark copse, on Botany Bay. The island is only accessible through the general's loyal Trial Announcers who will teleport you there. Trial announcers can be found in the following locations:

There are no requirements to access the Botfinder General's copse, only a hatred of automata and all who use them. So get your angry-mob mentality on, it's time to punish some bot users!

When a trial is ready, the Trial announcers will call out to let you know. Right-click teleport to be sent to the wood where the trial is being held. In the centre of the copse you will see a pit where the bot-users are raised up to receive their punishment. To the north of the pit is the Botfinder General's platform, where he will read the bot-user's crimes. Either side of the pit are the portals back to the Trial announcers and observation areas - complete with barrels of Rotten tomatoes for you to throw. From here you will be able to see the bot-user meet their fate, and pelt tomatoes at them while they are read their crimes.

Once the Botfinder General has read the bot-user's crimes, you'll be given a vote of how they should meet their end:

To receive the rewards below you will need to vote a certain number of times. To unlock all rewards, you must vote 7 times.

* Note that you must have the pitchfork of vigilantism equipped to unlock these rewards.