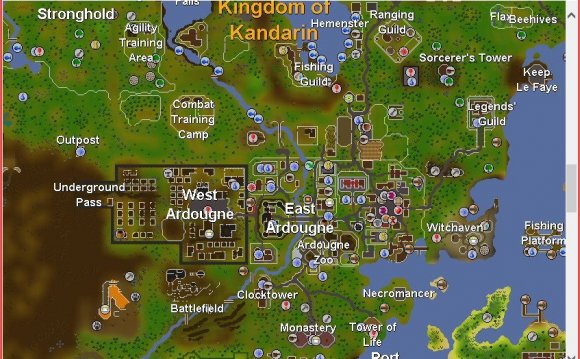 A Quest hall in a player-owned house is a room where the player can display quest achievements and awards. This room can be created with level 35 Construction and 25, 000 coins. There are 7 different hotspots available:

The main building hotspot in the Quest hall is the Stair/Rug spot. Either stairs or a rug may be built, but not both. Building rugs will have no complications involved.

When a staircase is added to a Quest hall, they will connect to the room above or below by default if and only if the room is facing the proper direction. If it is not, then one of the rooms will have to be demolished and rebuilt in order to secure a connection. This restriction is in effect for both normal staircases and, even though they do not have a "direction", spiral staircases.

If there is no room above or below the staircase, players attempting to ascend or descend it will be told that the staircase goes nowhere and asked if they wish to build a room there. The available rooms depends on what level the staircase is built from.

An amulet of glory (t) cannot be put as a trophy. The normal Amulet of Glory can be used an unlimited number of times without the need to recharge; just go near to it and click on it. If a teleporting player is poisoned, the glory also cures the poison and heals the player by the amount of damage the poison would have dealt next. Guild trophy items are recovered if removed.

Many players like to place a quest hall with a mounted amulet of glory beside a Chapel, providing fast teleports to Edgeville bank for rapid Prayer training.

Portraits can be bought in Falador like the maps (see below). They require the completion of certain quests to be purchased. Refer to a portrait's page to see which quests are required. If removed later the portrait will be lost.