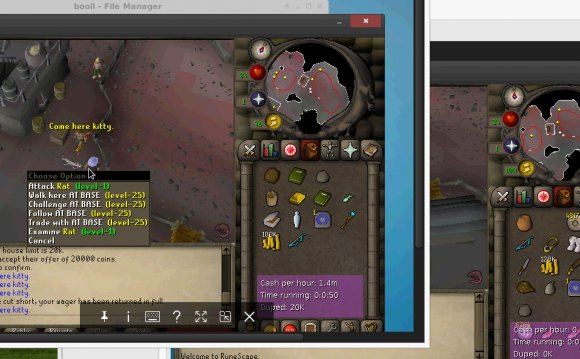 The Rat Pits is the only minigames that involve cats. There are four rat pits in RuneScape. It requires having done the Rat Catchers quest. They are in:

There are four pits. The first one, found in Ardougne, will only allow kittens. The Varrock one will only allow cats. The third one, located in Keldagrim, only allows overgrown cats. Finally, the Port Sarim rat pit will only allow wily cats. As lazy cats are not allowed, one will have to train it to become wily again before it is allowed.

A bet must be placed. The minimum allowed is 100 coins, maximum is 50, 000. Both players' bets must be the same before the game will begin. If the player has a catspeak amulet, he or she can tell the cat which strategy to use:

Once the bets have been placed and the strategies chosen, the cats begin to kill rats. The number of rats that need to be killed before a cat wins depends on the type of cat. If a cat runs away or dies, the owner of the cat will lose the bet. However, as said before, the cat will only be lost if it dies. In the case that both cats tire out at the same amount of kills, the match is declared a draw and both cats and bets are returned to their owners.