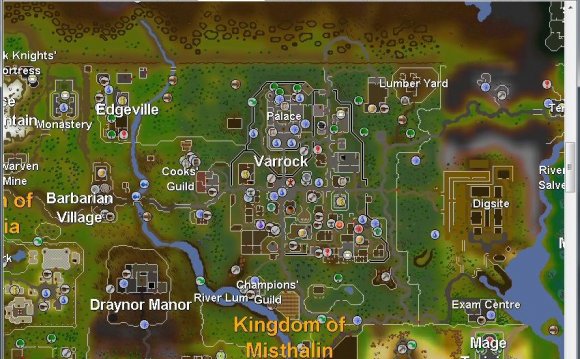 Seers Village is another one of the small, members-only villages of RuneScape. Despite its size, it's well-known as the former drop party capital of RuneScape, and massive amounts of Woodcutting/Fletching takes place there. Seers Village also happens to be a very prominent training location for low to high level woodcutters. Seers Village is a great place to buy and sell fletching or Herblore items.

Due to Fletching, flax has become an important part of Seers Village. There is a flax field, a spinning wheel, and a bank located within a reasonable distance of each other. This will call for easy Crafting experience, along with possible Fletching experience (for adding bow strings to bows).

The Forester's Arms is a bar that sells beer, meat pies, and stew. The beer costs 2gp, the meat pies costs 16gp, and the stew costs 20gp. Also located in the bar, is the Poison Salesman for the Murder Mystery quest.

The Coal Trucks offer a spot to get tons of coal, and then pick up that coal at a later time. To use the coal trucks, you have to go to the area on the western side of McGrubor's Woods, and mine coal - there are two ways to get there. The first is by heading directly west of Seers' Village, and crossing the railway tracks, and then the log obstacle (20 agility), or you can go to the south of the Fishing Guild, and make your way up to the coal rocks through one of the gates. Use the coal with the carts, and you will be able to pick up later at the unloading zone. This zone is located in a building north of the bar.

A Real Estate Agent has found a home in Seers Village: just east of the Bank. This agent sells blocks of land, can re-decorate your house, or move it's location - for a fee of course. He also provides you with a useful book detailing land and construction types.

Located in the forests just south of Seers' Village, Ignatius sells tinderboxes and the Firemaking cape.