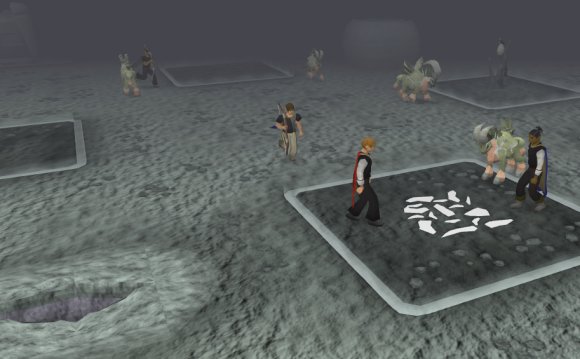 Directly East of the Falador lodestone in the Gamers' Grotto cave a strange phenomena has been occurring. There is a portal to a realm populated entirely by "sacred clay" which possesses the ability to mold itself into nearly any object or material imaginable. A group of individuals known as Mystics have found this portal and stabilised it, but they are currently looking for adventurers brave enough to venture into the realm and imbue it with energy.

In this game, skill-loving players and combat-loving players can work together. is required to create all necessary game items: weapons, armour, runes, and tools. can be used against the other team, and players can pickpocket the other team for items as well. It's good for teams to have players of both types in its ranks. In the Primordial Realm, doing nearly anything to help your team will gain you points. You lose points, however, through taking items from your base. You can see your individual score in the upper left corner, and the time remaining in the upper right. A game can last up to 20 minutes.

If you have access to the Ancient Magicks spellbook, and plan to fight during the game, change to it before you go. The spells in it are very helpful in combat.

There are no requirements to play Stealing Creation, but as it is based upon skill and combat experience. The higher your stats in relevant skills, the better you will perform.

A deposit box in the game area allows you to bank your possessions, because you cannot take any items into Stealing Creation. If you are defeated during the game, you will respawn inside the game.

Sacred Clay is the basis for this game. You need to gather sacred clay and convert it into items to do nearly anything in the game. Sacred Clay can either be dropped off at your teams base table (a safe area, which contains a table for dropping off clay or items, a mystic who can show you the amounts and types of clay available, and tables which store any items your team may have dropped off), or you can convert it into items at a creation kiln.

To make an item, choose the class on the left side of the creation kiln dialogue, then the item you desire from the middle list. The Kiln will automatically attempt to use the highest level of clay you have, but you can set it to a lower level of clay if you wish.