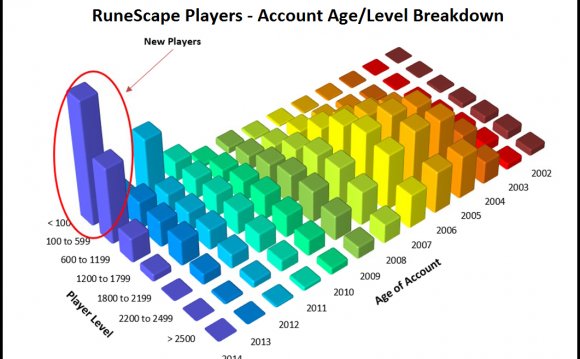 RuneScape 3 launched last month, and to help celebrate the third iteration along with the MMO turning 13 years old in January 2014, Jagex as sent over an infographic detailing some rather impressive stats for the franchise.

Across RuneScape’s history, players have accumulated one million years worth of total gameplay; every day over 1000 player created videos are posted to YouTube and 2, 700 forum posts are written; and over the course of the franchise, 220 million player accounts have been created since 2001.

Every minute in the game, 208 bosses are killed and enough weapons are crafted to equip 10 Roman Legions; and the developers continue to add new content on a weekly basis.

Furthermore, the firm has also announced that with the launch of RuneScape 3 in July, over 100, 000 players have re-activated their accounts, 300, 000 new players have joined, and players accumulate 600, 000 hours of gameplay each day.

1st Player to Max ALL Combat Stats in Runescape 2007!!