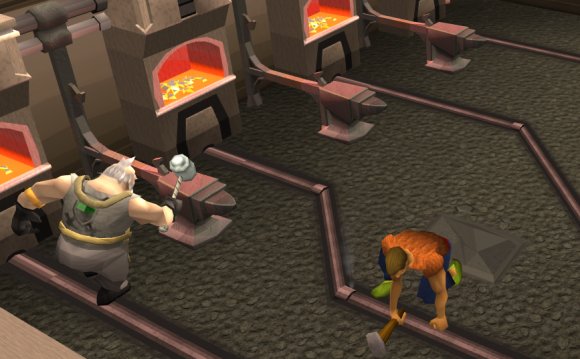 Bob the Jagex Cat is an enigmatic black cat and reincarnation of the ancient hero Robert the Strong. He travels the world of Gielinor with his girlfriend Neite, although he generally returns to his human Unferth's house every week. Like all cats, his speech can only be understood through the use of the Amulet of Catspeak.

As Bob likes to wander the world, he has one of the largest wander radius of all NPCs in the game, spawning in his human Unferth's house in Burthorpe every time there is a system update, but after which he is able to wander anywhere that is not restricted by physical boundaries, being able to wander to far away places such as Varrock and Port Sarim. It is possible to locate Bob by using the Amulet of Catspeak after it is enchanted in A Tail of Two Cats which, when operated, will open a menu that looks like a cat's face: Bob can be found in the direction that the white coloured dial is pointing.

Bob is a quite sadistic and cruel cat, having a particular distaste for dogs, advising people to "preserve nature" by pickling them. He also claims to have banished dogs from the land, although he appears to be boasting, as dogs are still commonplace. Bob also claims to dislike monsters, even claiming to be a member of the Humans Against Monsters cult, despite being a cat. Although supposedly a member of H.A.M, it would seem he does not take it quite as far as some of the other members, even being friends with the ogre hunter Rantz and even the King Black Dragon

He is also quite vain, believing that cats are the most superior creatures in the universe that rule over everything else. He claims to be the true ruler of Gielinor, claiming he only lets Grand High Mage Gower believe he is in charge.

Bob believes himself to be quite adept at combat, claiming to be able kill the player in one hit, and his girlfriend Neite claims that he often spends time hunting noobs in the Wilderness.

He also hints that he may be Zaros, although he seems to be joking. Azzanadra states Bob isn't Zaros, and that cats shouldn't be believed on that matter.

Bob is hinted to have had a relationship with Fluffs in the past, as Fluffs describes the father of her kittens as an adventurous cat who wanders the world. Bob himself confirms this, claiming to be the father of all cats owned by the player.

For some time, he had been pining for a cat known as Neite, a former human priestess of Amascut that had been turned into a cat thousands of years ago. While Neite did reciprocate Bob's feelings towards her, she prided in her knowledge of the family trees of cats. As Bob himself had no recorded ancestors, which worried her, and as she only involved herself with cats who had family or status, she rejected him. After Bob was revealed to be the reincarnation of the human hero Robert the Strong by the Sphinx, Neite and Bob started a relationship together, and Neite began travelling around Gielinor with Bob.

In the care of Gertrude

Gertrude Fairweather, the person who took care of Bob when he was a kitten.

Bob's origins are unclear. While it is known that he is the reincarnation of Robert the Strong, a legendary hero from the Fourth Age, the exact nature of this reincarnation or how it would take place is unknown.

Where Bob was born is unknown, as is the exact date of his birth, but at some point during the Fifth Age, Gertrude Fairweather, a Varrockian lady who regularly takes care of sick and abandoned animals, found a basket with a kitten inside on her doorstep, and the kittens collar identified the kitten as being named Bob. Gertrude took Bob in, looking after him while he was still a kitten bringing him up as best she could.

Bob soon learnt to take care of himself however, and Bob left Gertrude, eventually coming into the "care" of a Burthorpian man named Unferth, although Bob believes himself to be caring for Unferth instead. He was attracted to Unferth due to the house he lived in, which was in actuality located above Robert the Strong's ancient library.

runescape bob the cat catch my