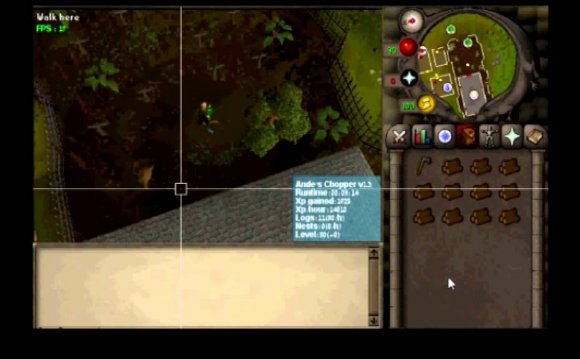 First off one of the best money makers for low level players is feathers. I stick by this, and it is a great way to train combat for a low level. You simply go to the chicken coop south of falador and kill the chickens. Gain the feathers and sell them for between 6-8 each. You will make good profit, and this is a fairly easy method as you can usually get about 1k+ feathers or more per hour. So this is good for low level players looking to just start out.

The next thing that works for low level players is skilling. Skilling provides a great way for players to make money.

First off is fishing. Start fishing in draynor village with a net, and you are close enough to a bank to throw anything you catch in there. This will add up, and will continue to make money until you can go fish lobsters. I suggest staying here until you can fish lobsters, and I also suggest cooking all the fish which will provide you with some extra cash, and boost that level for later on.

Woodcutting is another great money maker to work on from the beginning. It does not matter which log you are cutting because when you go to sell logs you will make profit on all logs. Players are starting to work on fletching, and this is a great way for players to make some profit through woodcutting because players will use logs for fletching or firemaking. So I highly suggest that you woodcut if you are looking for fast cash as well.

Another good method of making some decent cash fairly quickly is through many of the free collection options. First off is flax. Flax is used on bow strings which will allow players to continue their fletching levels. Players are not going out and making their own bow strings, so players that go through this effort will be rewarded for their efforts. While the pay is not great, the work does not require any special level, and is very easy to do, so this is another method I suggest if you are looking to boost your levels a bit.

If you are also looking to boost combat at a low level I suggest cows south of falador. Collect the hides, and either tan them and boost your crafting or sell them to other players and you will make good money. Not to mention a lot of players are not collecting the hides from the cows, so this will work to your advantage in that aspect as well.

As far as high level players go You can continue to skill and make good money, OR you can use combat. The best way for you to make money if you can kill them is chaos druids.

Chaos druids are level 40ish and have about 20 HP.. So it does not take a lot to kill them BUT they do drop a LOT of herbs. Herbs that can make you over 100K per hour. If you have teleports it can work even faster than that. I used this method a lot in the old runescape and I highly suggest it in the oldscape. I would suggest heading to the edgeville dungeon where you will find a good amount of them, kill them, and bank the herbs. You will make good money, and this will allow you to be successful in the long term. This is one of my favorite money making methods, and will make a good amount of money while raising your combat levels. Keep in mind that you should bring food if you are not a high level, but it is well worth going and fighting these.

Another method is slayer. Focus on the stat and you will make good money. Over time you will continue to add up your money over time, you will unlock monsters that drop great items over time. I suggest using these monsters to make decent profits in short amounts of time. Especially once you get to a higher slayer level. The key is that you keep all the drops, and turn those to profits later on.

Obviously bones, and drops from monsters make combat very effective at higher levels, but use caution and make sure that what you are putting into the fighting is worth the trip. Do not go for dragons and waste more money than you will make. But at the same time, steel and iron dragons give high drops, and will make players money if you are lucky enough. So go at your own pace and fight the best monsters you can while making profits.

As you can see there are a number of ways to make money depending on what you find enjoyable in the game. I will post other methods as the time comes, but for now here are a few for you to work on to develop your stats.