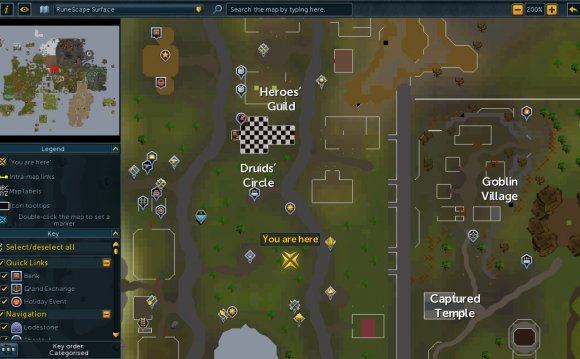 World switching, also known as world hopping exploits a side effect of the duplicate worlds within the game.

Each world is hosted on its own computer, known as a server. Servers are continuously connected to the internet, and receive tie-ins from connections of players all over the world. The servers host these players (up to 2000 on a single server) while they play RuneScape. To ease strain on the servers running , Jagex created many different servers as to not overload a single server with too many players. Unlike many other MMORPGs, a single character can visit any of the worlds.

Players log into that server and are able to interact with all of the elements—monsters, buildings, and items—found on that world. These worlds, each located on its own server, are identical in form and yet independent of each other. Actions taken on world 1 will not affect the building, monsters, or items on world 2. For example, buying all of the chisels in the Lumbridge General Store on World 1 will not reduce the number of chisels in Lumbridge General Store on any other world. The side effect of these semi-duplicate worlds is if a store is overstocked or out of stock, or a mine is too busy or mined out for now, players can return to the world select screen and try a different world.

When a player stays in a particular location — such as a shop or ore spawn — while changing worlds, this is called world hopping.

An update on has allowed players to freely hop between worlds by clicking on the logout button. Within the logout interface shows the world switcher button, where players can easily switch between worlds around Old School RuneScape. Players can also favourite up to two worlds at a time.

There are a few restrictions. Players cannot switch worlds if they have recently been in combat or have switched worlds multiple times in a row.