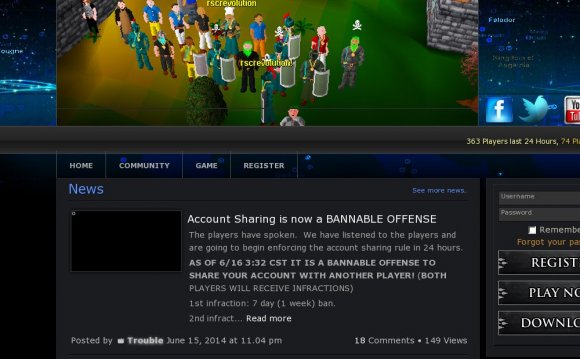 MMORPGsAre a dime a dozen these days but it remains one of the most dynamic genres out there, catering for a wide spectrum of players. Hardcore players will always have their World of WarCraft or their Eve Online. Players who do not want a subscription model have their Guild Wars 2 and don’t get me started on the licensed stuff such as Star Wars and Lord of the Rings that have fans of the movies/books playing out their favourite roles in those respective universes.

But with so many MMORPGs out in the market, competition is stiff for players’ dollars, time and commitment. And the main thing that acts as a hook to players is the community. Having a nice and friendly community is always a good thing, and such an example would be the community at Soulsplit.com. Soulsplit is a RuneScape Private Server, established since 2008. For those who are not familiar with RuneScape, it’s a browser-based MMORPG and according to Wikipedia it is the world’s largest free MMORPG and the most updated game.

Soulsplit is a market leader in the RSPS arena, with 4, 000 players simultaneously on peak time and still rising, and the management has just told us just what makes them the highest quality RSPS out there. The folks behind Soulsplit have worked hard in fixing up the in-game wilderness and at the same time gave players a great platform to form clans. For the player, Soulsplit has different game modes, namely an oldschool mode and enhanced graphics mode for newer players who prefer bells and whistles.

There are also different varieties of XP modes, that can vary from 5, 000 XP per hit or 10 XP per hit, so if you are either a player out for a challenge or simply one that enjoys entering Soulsplit’s highly populated wilderness, this is the game for you. With maximum entertainment in mind, this is one MMORPG that deserves your attention. Check out the website right over here: Soulsplit.com