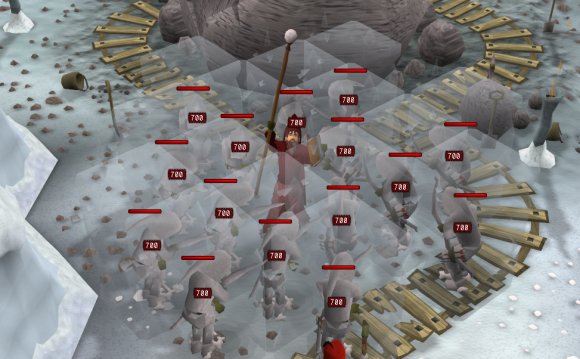 Ancient Magicks is a powerful branch of Magic that can be used once the Desert Treasure quest has been completed. They are members only and when you are on the Ancient Magicks spellbook you cannot use spells from any of the other spellbooks, however you can still use all magic abilities.

In order to switch to the Ancient Magicks spellbook you need to pray at that altar in the Pyramid, praying again will return you to the normal spellbook. Praying at the altar drains your prayer points to zero however you can still switch spells if you already have no prayer points.

After completing the Desert Treasure quest, rather than having to walk through the Pyramid every time you want to change spellbooks you can use a shortcut at the back of the Pyramid instead which takes you directly to the altar.

There are two types of Ancient Magicks spells, teleport and damage spells. There are four types and classes of damage spells as explained below, each type corresponds to a single element from the standard spellbook. This can be used to target specific monster weaknesses.

Shown below are some typical pictures of the animations of each spell. However bear in the mind that the different classes of damage spells have different animations.

Getting to the Pyramid

The Pyramid is located in the south-west of the Kharidian Desert which seems quite far out of the way however there are a variety of ways to get there, as shown below:

The Ancient Magicks spells are shown in your ability book in place of your normal spells. They use up more runes than the normal spells so are considered more 'expensive' per cast. Auto-casting ancient spells requires right-clicking on the spell and selecting the auto-cast option. Each combat spell does damage (see damage column) in addition to the specific spell type effect (reduce accuracy, reduce damage, heal caster, freeze). These spells can be dual-cast just like those on the normal spellbook.

Experience is awarded at the end of a kill, and is not based on the spell you use. Damage shown is the standard damage of the spell, without taking into account any modifiers. Your magic level is added to the base damage of each spell, which gives the damage shown in the equipment screen.

Like other spellbooks, the Ancient Magicks spellbook has teleports specific to it. While they are not often used, they can provide convenient wilderness teleports for those with access to the Spellbook swap spell. The Kharyrll teleport can also be bound in the portal room of a player-owned house for easy teleports to Canifis on any spellbook.

Note: Wilderness teleports will NOT give you a warning screen when you cast them.

* No runes are required for the Home Teleport spell, but the spell animation takes some time so it cannot be used to leave combat. However, it is very useful for players who are lost and need to get back to familiar ground. For players in the tutorial mode for the Burthorpe area, this spell will only teleport them to Burthorpe until the tutorial mode is disabled. Refer to the Lodestone section of the Getting Around guide for more information on lodestones.