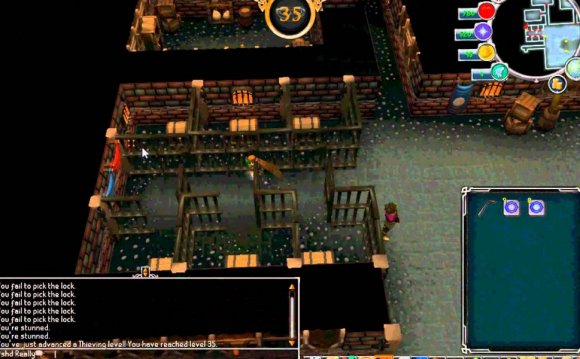 This guide describes the most effective methods to train the Thieving skill. The experience rate estimates in this guide do not incorporate the use of any experience boosting items or bonus experience. Thieving is a support skill which involves using techniques such as pickpocketing, coshing and lock picking to steal items and to gain access to restricted areas. As players level up the Thieving skill they gain the ability to steal from NPCs and scenery objects which award greater amounts of experience when they are successfully stolen from. Levelling up Thieving also decreases player's chance of failing Thieving activities where there is a chance of being unsuccessful.

Different tiers of Ardougne cloak are awarded on completion of the easy, medium, hard and elite sets of Ardougne tasks. While an Ardougne cloak 3 or 4 is worn it increases the player's chance of success when pickpocketing NPCs anywhere in RuneScape.

Wearing components of the black ibis outfit gives a percentage increase in the amount of base experience that is gained while thieving. There are four pieces in the set: the mask, body, legs, and boots. Items from the outfit can very rarely be found while looting urns and sarcophagi within the Pyramid Plunder minigame. The chance of finding a piece of the black ibis outfit is increased if the player is wielding a sceptre of the gods. The sceptre of the gods is obtained as a rare reward from looting the engraved sarcophagus in the final room of the minigame. The engraved sarcophagus requires level 91 Thieving to access and level 75 Runecrafting to open. If all pieces of the outfit are worn, then an additional set bonus effect is given.

The Trahaearn exoskeleton set is a reward obtained upon completing the Plague's End quest. The set consists of the exoskeleton headband, exoskeleton torso, exoskeleton legs and exoskeleton bracers. When wearing a complete set, players gain the following bonuses:

There are 2 Summoning familiars available which can be used to give a temporary visible boost to a player's Thieving level if their special move scroll is used while they are summoned. This can be used to allow the player to access content which they do not currently have the required level for as well as giving a slight improvement in thieving success rate.