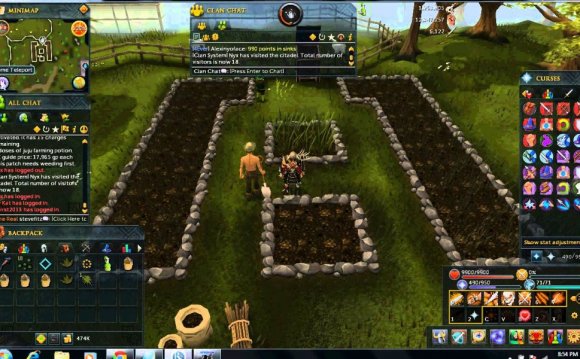 Farming is a skill in which players grow crops using seeds and harvest useful items from them, or more commonly, harvest the plant itself. The crops grown range from the standard staples of vegetables, fruit trees, herbs, hops, to more exotic and unusual crops such as wood-bearing trees, cacti, and mushrooms. The harvested items have wide range of uses, but are mostly used to train Herblore or Cooking, or simply eaten as food. Many players sell their harvest for a significant profit.

Once players have reached the intermediate level range and beyond, they can begin to plant wood-bearing trees. Player grown trees function just like their standard equivalents, which can be chopped down and regenerate after a short period of time to yield Woodcutting experience and logs. Player grown woodcutting trees have the added benefit of being only accessible to the player who grew them, which means that players will not need to compete to gather their own tree's wood.

The first music that can be played when leveled up.

The second music that can be played when leveled up.

The first thing any player will do when they begin training this skill is to rake away the weeds from one of the many farming patches found scattered around RuneScape. Once cleared, players have the option of applying compost to the patch BEFORE planting their seeds, which will decrease the chance of the crop becoming diseased, and will also possibly increase the yield of the crop once it reaches maturity. Players can also cast the Fertile Soil spell from the Lunar spellbook at any point during the plant's growth cycle to apply supercompost.

Compost can be bought in farming shops, or obtained by placing a total of 15 weeds or various other unwanted vegetables into one of the compost bins. Supercompost, which results in an even higher yield and further lowers chances of disease, is obtained by filling the compost bin with higher level farming produce such as pineapples, watermelons, calquats, coconuts, and high end herbs.

Seeds are usually easy to obtain. They can be bought from players and stalls, stolen via Thieving or obtained as drops from an enormous variety of monsters. Any lower or intermediate level seed is usually dirt cheap, ranging from 1-20 coins each, while the higher level seeds, such as tree, fruit tree, and especially upper end herb seeds, are usually thousands of coins each, if not more.