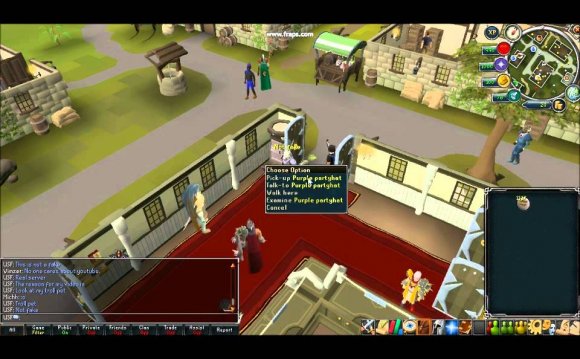 Christmas cracker was discontinued from RuneScape after an update, but still exists in-game for those who have it.

A Christmas cracker is a holiday item that was dropped during the 2001 Christmas event on 25 December 2001, the first Christmas event, and is arguably the rarest and most expensive/valuable item in RuneScape. They are not often sold on the Grand Exchange, instead traded for cash and/or items because of their value being greater than the maximum amount of coins.

Held within the cracker is a partyhat and one other item or a stack of items, such as some coins, runes, or rune armour. To open it, it must be used with another player. Upon opening, the player who had the cracker and the player it was used on each have a 50/50 chance to receive a randomly coloured party hat, while the other player gets the other item. While the free trade limit was removed, however, Mod Ash had confirmed that this was changed to the player with the cracker always gets the hat to prevent a possible method of real world trading. However, when free trade was redone, this was changed back to 50/50.

This means that the average profit in GE terms for pulling a Christmas cracker is -652, 089 based on Grand Exchange prices. However, the street price of the cracker can be upwards of triple, even four times greater than the market price, making the loss upwards of billions (some of the hats also trade above max cash).

The immense value of crackers and party hats on the street has posed a problem; the maximum gold stack is 2.147b, and the street price of the cracker is upwards of 6b, meaning items like h'ween masks, Santa hats, and other partyhats must be traded to offset the gold limit. Crackers are often traded via spirit shards and cash as well. Due to the immense value, it is extremely difficult to obtain both the money and the items necessary to purchase a Christmas cracker, with very few players having the wealth required to buy.

An update now causes the player using the cracker on another player to receive a warning message, asking them if they are sure they wish to do so. However, players are still strongly advised to keep Christmas crackers in noted form to prevent the unlikely accident of pulling them.

Few Christmas crackers remain due to the fact that many were pulled immediately after the drop. The vast majority of players opened them for the rune items that could be obtained from doing so. Note that at the time of the drop, Partyhats and Christmas Crackers were virtually worthless, while certain rune items such as the rune kiteshield were worth several hundred thousand. No one would've expected the Christmas Cracker to become worth billions a decade later.

Over time, many Christmas crackers have been lost as players with older accounts have quit, have been permanently banned or have opened their Christmas crackers for fun. Their importance to the RuneScape economy (which was so crucial for years starting a few years after their release) has long diminished. Other discontinued items such as party hats, halloween masks, and santa hats are far more commonly traded.

Because their numbers are so low, many expect the Christmas cracker to become the first extinct RuneScape item. When the last player either drops, pulls, quits RuneScape, or is banned with their cracker, the item will cease to be traded on the Grand Exchange or on the street.

Christmas crackers hardly ever update in price in the Grand Exchange, due to their street price being higher than max cash.

Since the free trade updates on 1 February 2011, the item has suddenly risen by 200 million coins. Jagex has stated that this was due to a miscalculation in prices for items that do not get traded in Grand Exchange often. The miscalculation was fixed two days later and the prices of most items affected were manually lowered by Jagex.