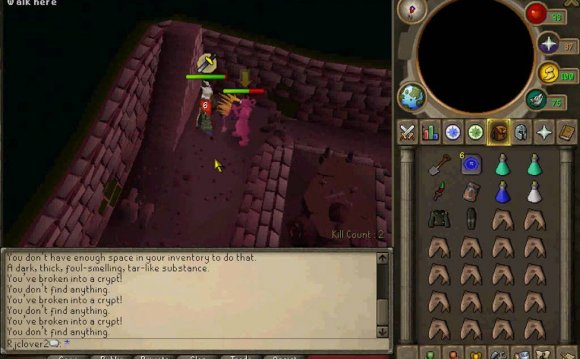 The Black salamander is the strongest salamander and can be caught using the Hunter skill at level 67 Hunter and gives 319 exp per catch. They can be found north-east of the chaos temple. It requires level 70 Attack, Magic and Ranged to wield, and is a 2-handed weapon. Harralander tar is used as ammunition for the salamander.

A player attacks using a salamander.

The black salamander is a possible weapon substitute for the Barrows minigame. The ammunition is cheaper than a cast of Slayer dart. In Barrows, the magic bonus does not affect its use as much, and casting in full rune armour has a similar effect as casting in full mystic robes. It can also be used to range Ahrim, but a rune crossbow is better. It is advised to use the melee option for Karil, as a dragon scimitar has better stats.

Salamanders can be used to train ranged, magic and strength.

Due to the nature of salamanders, combat experience is rewarded normally, only you will usually get less magic exp per attack because since you aren't using runes, there isn't a base exp amount per cast.

For melee mode the strength bonus of the salamander is used, which is 71 (same as dragon longsword).

The maximum hit for magic mode uses the "magic strength bonus" of the salamander. This bonus is not visible in the equipment stats, but is equal to 92 for the black salamander.

The max hit formula for salamanders is: floor(0.5 + Magic*(64 + Bonus)/640), where "Magic" is your visible magic level (the level shown in the stats tab) and "Bonus" is the "magic strength bonus" for the salamander, in our case 92.

This gives us the following formula for the black salamander, where "Magic" is your visible magic level:

(floor means you round the number down)

Specific boosts can increase maximum hits. The table below shows maximum hits from level 70 to level 104.

It offers high hits especially for magic, however it may not be as useful as using other weapons, such as a Trident of the seas. This is due to the lack of magic attack bonus and is limited to a distance of 1 square (also diagonally, unlike melee), which is problematic unless at Barrows due to their very poor magic defence.