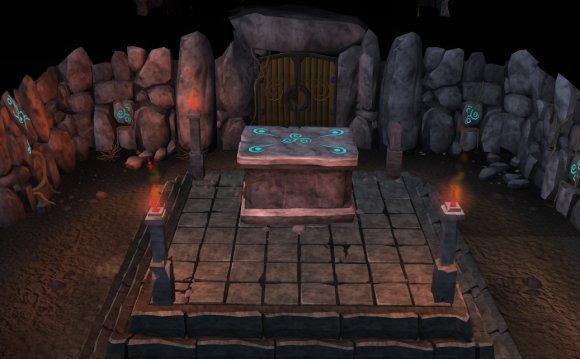 Must have completed Priest in Peril, and start/partial completion of Nature Spirit.

Must finish Priest in Peril and begun/finished Nature Spirit. Highly recommended quests are In Search of the Myreque (shortcut to the area) and either In Aid of the Myreque, Ghosts Ahoy, or Desert Treasure (for nearby banking in Burgh De Rott or Canifis).

The Barrows is a fairly large area located in southeastern Morytania, just east of the city of Mort'ton. For those who do not know where Mort'ton is, it is a city south of Canifis, beyond Mort Myre.

It is inhabited by the spirits of six brothers who died long ago in battle. The warriors' souls, however, have been tainted, but that is no concern of yours; you most likely just want their armor and weapons. The six brothers include one mage, Ahrim, one archer, Karil, and four warriors: Verac (the flail user), Guthan (the spear user), Dharok (the great axe user), and Torag (the dual-hammer user). Ahrim and Karil are both able to max hit around 20, and the warriors can normally hit in the 20's, but Dharok is the biggest threat of the six brothers. Dharok has a special effect; he hits higher the lower his hit points get, and he can hit up in the 60s when very low on hit points.

Each of the brothers has their own special effect if they are able to hit you. Verac's special effect is that he can hit through any kind of armor, INCLUDING PRAYER, so he can hit very often. However, prayer can still be effective against Verac as not all hits will pierce armor and prayer. Torag is able to drain your energy by 20% randomly. Karil lowers your agility by 20%. Ahrim lowers your strength very often and can also use spells to lower your attack and defense. Guthan is able to heal the amount of damage inflicted on you when his special effect is activated (this can even heal him if you are praying mind you). All of the NPCs except for Verac and Dharok can hit their special effects through your prayer.

There are many different strategies in order to kill these ghosts, and it is not really necessary (although it's definitely recommended) that you kill all six brothers. The following guide will lead you through the two most common strategies used amongst the people who barrow often.

Combat levels of the six brothers:

One of the most important things that you should know before going to the Barrows is that everyone has their own strategy, and there is no perfect way to go about getting items; it's totally and completely random, with an average chance of about 10% for an item at all. However, you will always receive coins and some missile runes from the chest, so it isn't a complete waste if you don't get barrows equipment.

Before I lead you into the strategies you might want to know what exactly that you are doing. When entering the barrows graveyard there are a total of six mounds, one for each of the brothers. To enter one of their tombs simply dig with your spade while standing on top of one of the hills. This will take you into a small room; within is a crypt and a staircase. The staircase will take you back to where you came from, and clicking on the crypt will do one of two things. The first thing it might do is awaken the spirit living in the crypt, one of the six brothers. This map gives information on which of the crypts belongs to which brother:

(Map made by Teashek, and edited by Sir karamu, original map by Coolgeekz)

The second thing that might happen when searching the crypt is that you'll find a tunnel. Every time that you go to the barrows, you will have a certain ghost that won't be in his crypt. He will instead be inside of the tunnel that you would enter if you decided to go in. The brother can randomly be spawned by opening a door down in the crypt, or by opening the barrows treasure chest. Therefore, you will find a total of five brothers in their crypts, and one brother inside of the tunnel. If you continue reading this guide, you will find two different strategies on killing the Barrows Brothers, but for the moment I will continue on.

Once you have killed the desired amount of brothers from their crypts (Although you don't have to, it is very strongly advised that you kill all five of them), you may descend into your tunnel. The main outlook of the tunnel is a 3x3 grid with doors connecting every adjacent room with small hallways and all adjacent edge room with long hallways. It should also be noted that there are many monsters in the tunnel which can hit up to 9-10 damage, and should be avoided if possible; they do not help you receive barrows equipment. The tunnel is always the same layout, but the doors are locked differently for different people.

If you are stuck and cannot find your way into the center room try standing next to one of the four doors and angle your camera so that you can see the middle room, you will be able to see the other three doors as well, which will help you find which one has the "Open" option. Once you have found the door you will have to answer one of the four questions correctly:

Note: the answers aren't always in the exact same order... so pay attention to which one is which!

Once you have answered the puzzle correctly, the door will be able to open. If you answer the puzzle incorrectly then the puzzle door will be changed to a different door and you must find it again. Once you have gotten into the center room you will see a closed chest. If you haven't already run into and killed the sixth Barrows Brother, he will appear once you open the chest. Kill him, and you are ready to search the chest. Once you have searched the chest, the cave will start collapsing and hitting random hits on you until you get out of the cave. It's your choice here whether you teleport out and bank or find your ladder again to go straight back to fight the brothers.

I must warn you that you ARE NOT assured anything out of the chest no matter how many times you go or how many things you kill. If you notice in the bottom right corner of your screen you will see a kill counter. This appears whenever you are in the tunnel or in one of the brothers' crypts. The kill count rises when you either kill one of the brothers or one of the creatures inside of the tunnel. The kill count in no way affects the chance of you getting a barrows item. The only way to increase your chances of getting barrows armor is by killing more of the six brothers, although it is very possible to get barrows armor or weapons by only killing one brother (just much less of a chance than if you killed all six).

Once you have left the tunnel, everything in the barrows will reset, including your kill count and the barrows brothers themselves (this also means that you might meet a different brother in the tomb). Now it's on to the strategies that you might want to use while visiting the barrows.