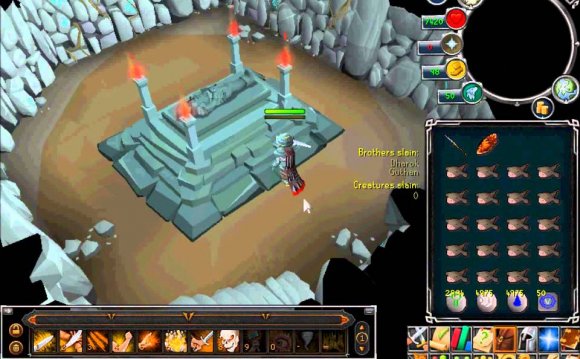 Barrows is a members only, combat-based minigame in which you do battle against six powerful brother spirits (seven if you have completed the Ritual of the Mahjarrat quest) for a chance to receive a piece of their armour. It can be played by adventurers of all levels and is not only quite enjoyable for many people but also profitable. As such, this guide will cater to all kinds of players.

During the Temple at Senntisten quest you are required to do a Barrows trip in order to obtain the Barrows icon.

Note: You cannot use Summoning familiars or the Dwarf multicannon during the Barrows minigame.

Below is a list of requirements to play the Barrows minigame as well as some suggested requirements. Note that it is not necessary to bring a spade to enter the tombs of the brothers.

Barrows can be attempted with levels below these, however you may find it difficult to do multiple trips without banking or even one trip without banking.

*After completing the Branches of Darkmeyer quest.
**After the total level of the NPCs in the Temple Trekking minigame has reached 500

Upon arrival at the Barrows you will notice there are six mounds which are home to the six (or seven) Barrows Brothers. In order to access the tombs under the mounds where the brothers reside you can use the spades provided at each mound to dig while standing atop the mound of the Brother you wish to fight. You should be aware that when you enter a brother's tomb, your prayer will start to drain at a speed dependent on the number of brothers you have killed.

Below are profiles of all seven of the brothers you can fight, including the special effect their armour set has and a very basic information for them. For more detailed information on how to fight them, see the section.

Every time a Barrows run is started, a random brother's coffin will be chosen as the entrance to the underground tunnels. Instead of having the brother appear to fight you, you will be given the option to descend into these tunnels. It is here that the chest containing your rewards is located. Your goal will be to make your way to the centre room without the aid of a minimap while having your prayer be drained by the previously defeated brothers. Note that as long as you do not open the chest inside, you may enter and exit the tunnels freely without resetting your progress.

Opening doors will cause random monsters to spawn. These may either be a crypt rat (level 43), a bloodworm (level 52), a skeleton (level 77), or the Barrows Brother whose crypt you are currently in. Once defeated, the brother will not appear again. All the creatures that may be found in the tunnels are listed below.