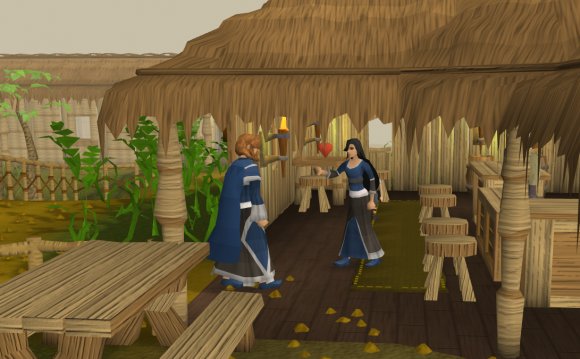 Sylas is the old man with a walking stick in Taverley. He can be found south of the Player Owned House portal. Talk to him and he will ask you to get two rare items in return for his magic beans:

Telling a story to Grimgnash the griffin.

To reach Grimgnash, proceed to White Wolf Mountain from Taverly and follow the path that is located the farthest east along the mountain until you reach two white lines. Go through them, and up the path to reach the NPC.

The Griffin will state that it cannot get to sleep because of the howling wolves and will threaten to eat the player if he doesn't tell him a bedtime story. Grimgnash says he loves stories with death, fire and destruction...Tell him a bedtime story by selecting the options which sound the most violent:

Once Grimgnash is asleep, steal a feather from the pile next to his nest and go back to Sylas.

Note: If you have a low Hitpoints level, be careful. If Grimgnash doesn't like your story, he will hit you with 10-20 points of damage.

Rupert the Beard can be found in a tower in between Goblin Village and Ice Mountain.

If you attempt to get in by the door of the tower, a rather snobby looking princess will stop you. In order to get in, you will need to go around the back and climb over the crumbling wall (58 Thieving Required).

Next, talk into the pipe and you will find yourself talking to the dwarf imprisoned at the top of the tower.

Talk to him a second time to find out how to get up the tower, and suggest that you should climb up. He will throw down his beard, climb it (59 Agility Required). Talk to the dwarf who regrettably cannot give you his helmet as the princess has stolen his armour and locked him in the tower.

He asks you to talk to princess Miazrqa, who is north of the tower. She says that she will happily release the dwarf if you get back her pendant which was stolen by a mouse in her second cousin's (twice removed) house which is the witch's house in Taverley.

Go to the basement of witch's house and wear some leather gloves to avoid an electric shock from the gate which can cause 16 damage. (Gloves can be obtained by repeatedly searching the boxes in the basement near the piano. You may also get other junk like needles and cabbages, keep trying until you get the gloves) Open the cage door and search the music stand to find some music sheets for the piano.