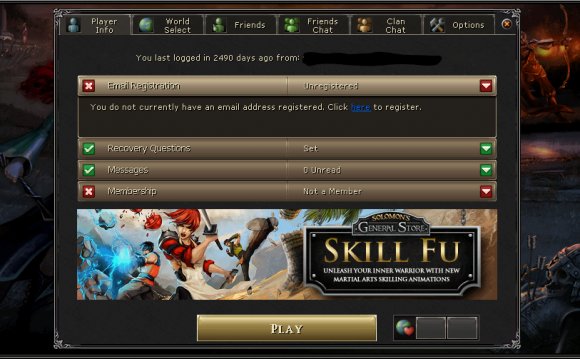 RuneScape Classic (abbreviated RSC, RS1 or RS Classic), publicly released on 4 January 2001, is the second version of (DeviousMUD being the precursor). It is commonly called RuneScape 1 or RS1 by players who'd played RuneScape Classic before was released. It was replaced on 29 March 2004, with what was then known as RuneScape 2.

DeviousMUD, the precursor to RuneScape Classic, and the forefather of RuneTek, was created and developed by Andrew Gower some time in 1998. He created the platform solely based upon Java-dependent computing and 2D graphics.

Later, several months after the initial development of DeviousMUD, an open beta was announced for those who wished to play the Java-based game straight from their computer. After much success, RuneScape Classic was open to everyone after the Gower brothers decided to maintain and build upon their already existent business.

RuneScape Classic is still available for those who can access it, however the game receives little attention. During the first month of RuneScape 2, all stats were copied from RSC to RS2 and players were able to transfer items at various points between both games. Eventually this was disabled permanently and whatever items were left remained on one game or the other. The same account is used for both games but items, progress and skills remain separate.

Logging into RuneScape Classic 5 years after it was closed.

On 4 August 2005, Jagex discontinued and closed down the free version of RuneScape Classic; it remains inaccessible to this day for free players. Jagex claimed this was largely due to the free version being mainly used to break rules. On 15 January 2006, only players who had logged in between 4 August 2005 and 15 January 2006 could play RuneScape Classic, meaning that members could not access RSC unless they had logged in within that time frame. This was due to a number of problems, one being that Jagex simply decided that RuneScape Classic's uptake imposed a heavy cost on hosting the servers, since it is no longer updated. On 20 November, 2007, Jagex closed the RSC forums to non-RSC players, but has since been reopened.

A player on tutorial island

Jagex has since then reopened RuneScape Classic to members with an update on November 11 2009. After this renewal of interest, Jagex has since decided to re-open RuneScape Classic to members, old and new, every six months, however they permanently shut down RSC back in 2011 and the only way to have access now was to have logged in on one of the weeks where it was reopened. Once Jagex reopened RSC, a few members who had lost connection to RSC were able to log back in and play with their old characters.

Before they closed the RSC forums, Jagex had a thread running for a few months on the RSC General forum asking players to sign if they wanted to keep on using the forums. Many players missed this thread and therefore they were denied access. However, after many players suggested it, Mod Stevew, a Jagex Moderator, added a new sticky thread to the Forum Feedback forum allowing players to sign if they wish to have access, provided that their account is a RSC account.

On 11 January 2016, RuneScape Classic was reopened as part of the 15th year anniversary of RuneScape. The servers will remain open until 11 March 2016, after that access to the game will only be possible by players who had logged on at any point during the reopening.

There were originally only regular trees and bronze axes when the game first came out. When members were introduced into the game, Oak trees were added. However, Jagex later updated the game and introduced many more trees once they created the Fletching skill. Free-to-play players could still only chop regular trees, though. Unlike RS2, in RSC, chopping trees takes more time, as you can 'slip and fall' and fail to cut the tree, and have to try to cut it again. However, you could continue to cut logs with a full inventory. Excess logs would be automatically dropped on the ground. In very early days, player had to use the axe on a tree to cut it, requiring a lot of clicks.

Only the logs of normal trees can be burnt, and you can burn logs anywhere, even banks. You have to drop the logs before you could burn them. Experience allocated per log depends on the Firemaking level itself. It is the only skill to work this way, meaning experience is gained more quickly as levels are gained. Before fletching was added, woodcutting worked the same way. After the update, some players (especially free users) complained that regular logs didn't give as much experience as they used to.

Before the introduction of pickaxes of different materials, there was only one type of pickaxe. Pickaxes couldn't be used as weapons. In mining originally, rocks wouldn't change colour when there was ore present. Thus players had to prospect each rock which led to repetitive clicking. It wasn't until the introduction of Fatigue that rocks began to show when they had ore in them. Furthermore, you didn't automatically hit the rock, you had to click every individual hit. Before even that, player had to use pickaxe on a rock instead of just clicking on a rock. New pickaxes of all kinds came out that could hit multiple times per click.

For a long time, bones and big bones were the only forms of experience for Prayer, which made it very hard to train. It wasn't until someone suggested making dragon bones that there was anything better, and those were the only three bones available until RS2, besides bat bones but they were very rarely used. There were two types of protection prayers that time: "Paralyze monsters" which would work the same way as "Protect from melee", but wouldn't work against players and "Protect from missiles" which would completely protect the player from ranged used by other players. Enemy monsters did not have an ability to use magic or ranged. In the very early days of RuneScape Classic, prayer was divided into 2 parts: PrayGood and PrayEvil.

How to Play RuneScape Classic without an Existing Account!