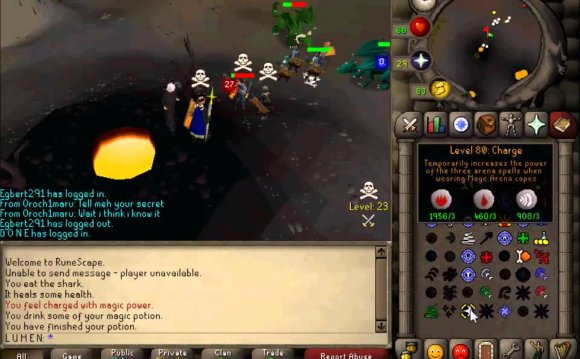 Green dragon bots are macros that exist in member worlds, and are one of members' most common macros.

They hang out in the Wilderness killing Green dragons to collect the bones and hides they drop.

These macros are usually not default looking players and were originally played by a user as they may usually did quests for one of their equipment, most notably Lost City the start of the Dragon Slayer quest.

On December 10 2007, Jagex implemented an update which made large trades of wealth impossible. Because of this, almost every macro in the game disappeared. However, Jagex returned the Wilderness and free trade on 1 February 2011, which resulted in a sudden surge in green dragon bots.

However, their patterns have changed slightly. Most if not all of the remaining bots have now moved to the Green Dragons east of Clan wars as well as the ones in the Chaos Tunnels, leaving the Green Dragon areas north of Goblin Village and south east of the Lava Maze mostly free of them.

They usually obtain their body and legs from buying in the shop in the Champions' Guild and their shield from talking to the Duke during the Dragon Slayer quest.

When they start fighting they won't wear anything on their head, and will obtain their helmet when it gets dropped by a green dragon, Defence, and/or Constitution on the high scores, and rarely prayer. A very effective way of identifying is to cast the Lunar spell Stat Spy on suspected bots (requires 75 Magic).

Green Dragon bots used to sell their collected items in front of Falador east bank on World 2. They could easily be identified by their names and what they're selling, and they would also still be wearing their armour. However, since the release of the Grand Exchange, most bots now sell their items there.

Since Green Dragon bots reside in the Wilderness, it is possible to try and kill them. If attacked by someone, they usually run, teleport, or maybe retaliate. As they typically wear metal armour, their main weakness is magic attacks, so a combination of holding spells (like entangle), teleblock, and hard hitting spells such as Storm of Armadyl, Ice Barrage, and the Polypore Staff are usually preferred. It should be noted that some more advanced bots are capable of recognizing the teleblock spell and teleport before it takes effect, reacting faster than a human possibly could. Rarely, bots may activate protection prayers to reduce damage from incoming attacks, so multiple attack styles and prayer draining tactics such as the Smite prayer or Soul Split curse can also be used.

Players hunting these bots should always be aware of player killers and Anti-Bot Hunters.

Removal of Wilderness and Free Trade

One of the updates was players could no longer attack other people in the wilderness, meaning Green Dragon bots can no longer be PKed (unless encountered on PvP worlds).

Instead, wandering ghosts called revenants were added into the wilderness, which replaced the pking system.

These ghosts could attack from all three sides of the combat triangle, and could freeze their target, teleblock them, and restore their own life points and cure themselves of poison.

They could also steal the player during combat and hit notably high for their combat level (a level 68 vampire can hit up to 220 life points). So under the right conditions, revenants could kill many bots in just one area, though this was a very rare occurrence, and revenants were just as likely to attack legitimate players as well.

Return of the Wilderness and Free Trade

Many players were upset at the release of revenents as they commonly killed non green dragon bots. However, this was changed on 1 February 2011; the Wilderness and Free Trade were reinstated and players could once again attack and kill green dragon bots.

Green Dragon bots generally wield low to medium level metal armour (usually granite or rune), an anti-dragon shield, and either a Brackish blade or an abyssal whip. In their inventory, they usually carry teleport runes or teletabs (usually Varrock, or Falador for the dragons north of Goblin Village), and food such as lobsters & trout.

ons near the lava maze, as well as the ones north of the Graveyard of Shadows (the latter dragons are now removed from the game since dec 10). When they die, they lose everything they're holding except their 3 most valuable items, which is usually their weapon, chest armour, and leg armour. They will also lose their dragon bones and hides if they're carrying any.

As of 1 February 2011, players no longer get gravestones in the Wilderness, and any items dropped by the bots can be picked up immediately. If they do die, they will normally reclaim their shield from the Duke of Lumbridge, and continue fighting without their helmet, amulet, or cape (though they may get their helmet again when it gets dropped by another dragon).

Other macros resembling Green Dragon bots can also be found in the second level of Stronghold of Security killing level 35 Flesh crawlers in the south-east corner of the maze.

They will have similar macroing names, and wear the same armour mentioned above, except they will usually use a rune scimitar and a rune kiteshield instead. These bots are likely lower leveled macros who are training their combat levels up in order to become strong enough to fight Green Dragons.