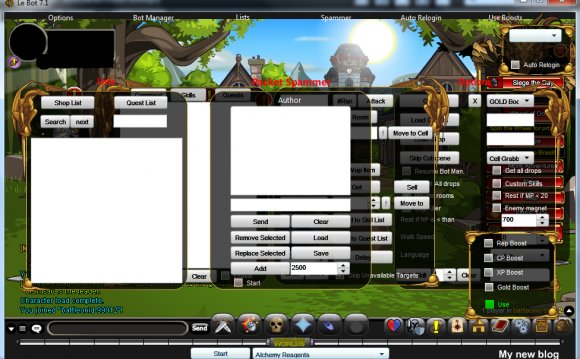 Although the titles sounds like some l33t hacking tool, aimed at destroying some vital computer system, this post will be a little mundane. For a while I was searching Google for a way to build a click bot on my Mac. I didn’t want to use it for something malicious, I was just interested after coming across a couple of articles on this subject. To actually create a click bot requires literally only a couple of steps. I was amazed at myself for my own stupidity when I managed to find out how to do it.

To create a click bot you need to use a program on your system called Automator. Automator is one of those programs that is really powerful, but is hardly ever advertised. It is shown on the Apple website but is usually replaced by more “shiny” programs such as iLife which appeal towards the masses.

The first step in creating a click bot is to open Automator. This is located in Applications > Automator. When the program opens you will be greeted with a simple interface. On top of this is a pop up window asking if you want to chose a Custom workflow, File & Folder workflow, Music, Photos or Text. Chose custom for this exercise.

You will then be greeted with the main interface. On the left you have the draw where you can pick and chose from a library of inputs. The right hand side is the workflow page. Automator is massive. I could write an entire website on Automator and in fact there is, there are also loads of books on the subject. Anyway the point of this post is to lightly skim the surface on this topic.

To record the click bot we are going to use the record user interface events button. It is a simple way to record what you want to do. Alternatively you could use the library on the left, but this way is much quicker. The record button is located in the top right corner of the toolbar.

Press the record button. If you have used record macro events in programs such as Word or Excel you may know how this works. At the moment automator is recording all of the user interface click and typing events. Every time you click on a window, button, select a piece of text etc it will record what happens. But it doesn’t record time between the clicks.

To record your click bot do exactly what you want to do. I am going to record on where it opens Google, types some text and presses search. Very simple. You will notice during the recording a small floating widget that appears on top of everything. Once as you are finished with your click bot your can press stop.

That is it, your workflow click bot is done. Click the play button and it will play it back following the exact mouse movements. You can now do it for anything you want. You can also speed it up to run in double time.

There of course some limiting factors. It follows your mouse movements. So if you move stuff about it might not work. What I recommend you do it just play. Mess about with the settings, the variables. Change somethings about, see what happens. You could eventually make a sophisticated click bot from the workflow window.

Awesome Runescape Bot - Easy to Use for Mac