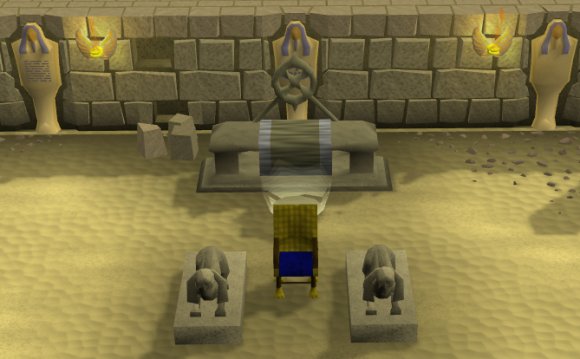 Spellbook Swap is a Lunar and Ancient Magicks spell which allows the caster to switch to another of their enabled spellbooks for only one spell, or for two minutes if no spell from the alternate spellbook is cast. For example if a player casts Spellbook swap (from the Lunar spellbook) and chooses 'standard spellbook', then they have the chance to use one modern spell just once, after which, the player is automatically returned to the Lunar spellbook. The chosen spell will also cost runes as if the spell was cast normally. Players must keep recasting spellbook swap if they intend to repeatedly cast spells in other spellbooks. Spellbook swap can also be used to cast spells from the Ancient Magicks spellbook, provided that they have completed Desert Treasure.

The spell can be useful for combining teleport spells from different spell books, such as Varrock Teleport, which can only cast with the standard spellbook. The occasional High Alchemy of valuable slayer monster drops also seems a likely usage. The spell book swap also opens the Lunar spellbook to the offensive capabilities from the other types of magic, although with a much reduced frequency. However, with a requirement of level 96 Magic (surpassed only by Borrowed Power for highest magic requirement of a spell), this option is available only to high level mages. This spell can be used with the Assist System.

If you activate this spell on a members world, swap to the standard spellbook, and log into a free-to-play world, you will actually be able to cast a spell there. Changing worlds also resets the 2 minute timer.

This spell can be interrupted by combat, although quickly clicking and choosing a spellbook between attacks allows the caster to swap books in combat.

This spell will become part of the Ancient Magicks spellbook after the completion of The Light Within.

Book of Spells (old Runescape) - All tracks on keyboard

RuneScape - How to change ur spellbook from ancient to normal